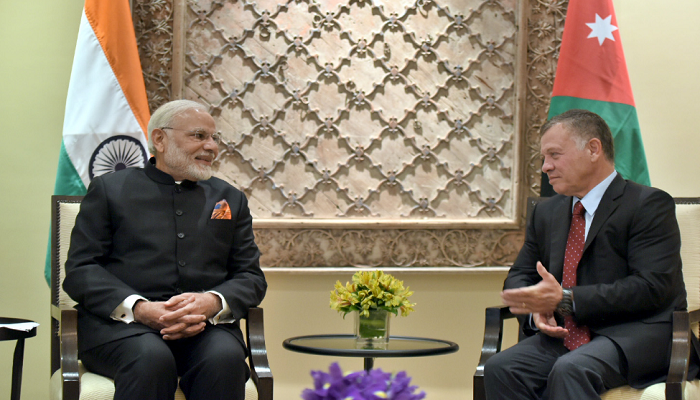 New Delhi, December 17, 2020: The third round of Foreign Office Consultations between India and Jordan was co-chaired by Sanjay Bhattacharyya, Secretary (CPV & OIA) and Yousef Bataineh, Secretary General, Ministry of Foreign Affairs and Expatriates of the Hashemite Kingdom of Jordan through video conference on 16 December 2020.
Both sides underscored that the historically warm and cordial relations received a strong fillip following the visit of Prime Minister Narendra Modi to Amman in February 2018 and the return visit soon after by King Abdullah II to India in March 2018.

They noted with satisfaction the significant growth in cooperation in the fields of defence and security, including counter terrorism, trade and investment, ICT, tourism, education and culture. India lauded the role of the Aqaba Process in facilitating regular, comprehensive dialogue on counter-terrorism among global stakeholders. Acknowledging the rapid expansion of trade volumes, which rose by 20% during 2019-20 to reach USD 2 billion, they agreed on the need to diversify the trade basket that is at the moment dominated by a limited range of commodities – fertilizers in case of Jordan’s exports and electrical appliances, textiles, automotive parts, and meat products for Indian exports. Indian companies were invited to participate in Jordan’s infrastructure development, especially in road, railways, power and construction sectors. It was agreed to convene the 11th India-Jordan Trade and Economic Joint Committee and India-Jordan Joint Business Council meetings on an early date.

India welcomed Jordan’s visa on arrival facility for Indian nationals and requested its further streamlining so that it would effectively boost tourism and people-to-people contacts. They noted that Jordan was emerging as a favoured shooting location for Indian film makers.

The Jordanian side thanked India for facilitating commercial export of masks and medicines to Jordan during the Covid-19 pandemic outbreak. India will train Jordanian medical experts in Covid management and emergency care. Both sides have also worked closely in facilitating repatriation of each other’s nationals during the lock-down through India’s Vande Bharat Mission flights. There was a discussion on possible cooperation on the vaccine front.

The two sides had an in-depth exchange of views on regional and international issues of mutual interest.
Secretary (CPV & OIA) extended an invitation to Yousef Bataineh to visit India next year for the fourth round of Foreign Office Consultations.