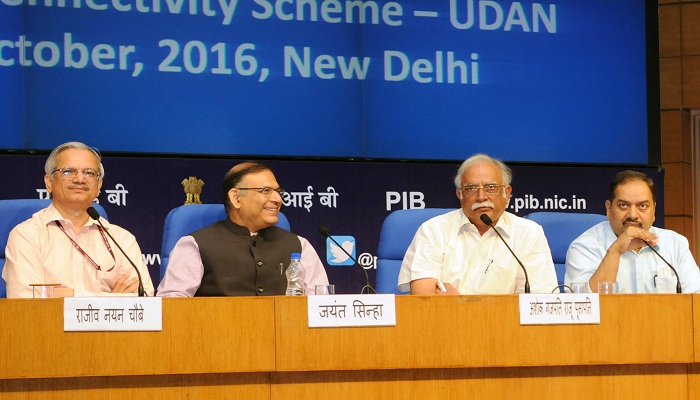 With UDAN, the Civil Aviation Ministry  took a major step towards making flying a reality for the small town common man. The Civil Aviation Minister P Ashok Gajapathi Raju launched the Ministry’s much awaited Regional Connectivity Scheme “ UDAN” in New Delhi today. UDAN is an innovative scheme to develop the regional aviation market. It is a market-based mechanism in which airlines bid for seat subsidies. This first-of-its-kind scheme globally will create affordable yet economically viable and profitable flights on regional routes so that flying becomes affordable to the common man even in small towns.

Speaking on the occasion the minister of the Civil Aviation Ministry Raju expressed hope that the first flight under the scheme would be able to take off by January next year. He said the scheme had been prepared after a lot of stakeholder consultation and called for support from all players to make it a success.

Also speaking on the occasion the Minister of State for Civil Aviation Jayant Sinha said that the objective of the UDAN scheme was “Ude Desh Ka Aam Naagrik” He said this scheme ensure affordability, connectivity, growth and development. UDAN would provide a win-win situation for all stakeholders – citizens would get the benefit of affordability, connectivity and more jobs. The Centre would be able to expand the regional air connectivity and market. The state governments would reap the benefit of development of remote areas, enhance trade and commerce and more tourism expansion. The Civil Aviation Ministry  says that for the incumbent airlines there was the promise of new routes and more passengers while for and start-up airlines there is the opportunity of new, scalable business. Airport operators will also see their business expanding as would original equipment manufacturers .

The Civil Aviation Ministry  scheme UDAN envisages providing connectivity to un-served and under-served airports of the country through revival of existing air-strips and airports. The scheme would be in operation for a period of 10 years.

UDAN has a unique market-based model to develop regional connectivity. Interested airline and helicopter operators can start operations on hitherto un-connected routes by submitting proposals to the Implementing Agency. The operators could seek a Viability Gap Funding (VGF) apart from getting various concessions. All such route proposals would then be offered for competitive bidding through a reverse bidding mechanism and the route would be awarded to the participant quoting the lowest VGF per Seat. The operator submitting the original proposal would have the Right of First Refusal on matching the lowest bid in case his original bid is within 10% of the lowest bid. The successful bidder would then have exclusive rights to operate the route for a period of three years. Such support would be withdrawn after a three year period, as by that time, the route is expected to become self-sustainable.

The selected airline operator would have to provide a minimum of 9 and a maximum of 40 UDAN Seats ( subsidized rates )on the UDAN Flights for operations through fixed wing aircraft and a minimum of 5 and a maximum of 13 Seats on the Flights for operations through helicopters. On each such route, the minimum frequency would be three and maximum of seven departures per week. Route networks would also be encouraged under the scheme to achieve economies of scale and optimal usage of aircraft.

The fare for a one hour journey of appx. 500 km on a fixed wing aircraft or for a 30 minute journey on a helicopter would now be capped at Rs. 2,500, with proportionate pricing for routes of different stage lengths / flight duration.

This would be achieved through (1) a financial stimulus in the form of concessions from Central and State governments and airport operators and (2) a Viability Gap Funding to the interested airlines to kick-off operations from such airports so that the passenger fares are kept affordable.

• Central Government would provide concessions in the form of reduced excise duty, service tax, permission to trade ASKMs for Non-RCS (UDAN) Seats and flexibility of code sharing at the RCS (UDAN) airports.

• State governments will have to lower the VAT on ATF to 1% or less, besides providing security and fire services free of cost and electricity, water and other utilities at substantially concessional rates.

• Airport operators shall not impose Landing and Parking charge and Terminal Navigation Landing Charges in addition to discounts on Route Navigation Facility Charges.

A Regional Connectivity Fund would be created to meet the viability gap funding requirements under the scheme. The RCF levy per departure will be applied to certain domestic flights.

The partner State Governments (other than North Eastern States and Union Territories where contribution will be 10 %) would contribute a 20% share to this fund. For balanced regional growth, the allocations under the scheme would be equitably spread across the five geographical regions of the country viz. North, West, South, East and North-east.

The States have a key role under the scheme. The selection of airports where UDAN operations would start would be done in consultation with State Government and after confirmation of their concessions. It may be recalled that revival of dysfunctional airports and starting operations on un-served airports has been a long standing demand of most States and this will be addressed through UDAN to a large extent.

The UDAN is likely to a give a major fillip to tourism and employment generation in the hinterland. Through introduction of helicopters and small aircraft, it is also likely to significantly reduce travel timings in remote and hilly regions, as well as islands and other areas of the country.

Chickpea prices may cool down soon, as government prepares for a fight