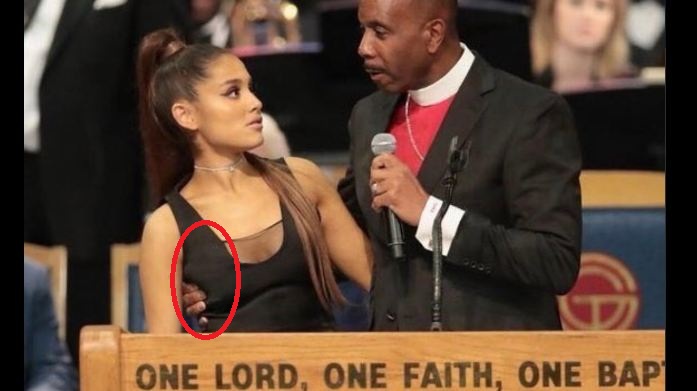 The Bishop who officiated Aretha Franklin’s funeral apologized this Friday to Ariana Grande.

He inadvertently ended up touching her breast and made fun of her when compared her with a Taco Bell.

Bishop Charles H. Ellis III led Franklin’s funeral and awkwardly greeted Ariana Grande on stage after she performed “(You Make Me Feel Like) A Natural Woman.”

The video of him holding her waist with fingers touching her breast swamped social media with people trending #RespectAdriana.

Bishop apologized in an interview with The Associated Press. He said:

It would never be my intention to touch any woman’s breast. … I don’t know I guess I put my arm around her. Maybe I crossed the border, maybe I was too friendly or familiar but again, I apologize. I hug all the female artists and the male artists. Everybody that was up, I shook their hands and hugged them. That’s what we are all about in the church. We are all about love. I personally and sincerely apologize to Ariana and to her fans and to the whole Hispanic community,” Ellis said. “When you’re doing a program for nine hours you try to keep it lively, you try to insert some jokes here and there.

Ariana Grande also came under fire for wearing a revealing dress on a funeral.

However, the singer Ariana Grande chose to stay mum on the issue but here is what Twitter said on the whole episode:

It is all of a sudden. It is not about what Ariana Grande is wearing. It is about how that pastor treated her. We have the rights to wear what we want and express ourselves. And we also have the rights to be respected regardless of our gender or our outfit.#RespectAriana

People are like "she should have said something" when shit like that happens to you, you don't say shit you freeze up. #RespectAriana

WAKE UP PEOPLE she looks so uncomfortable here and ya know what? He is so disgusting, he groped her many times and people still "it was an accident" omg those who say that can keep your opinion away bcs yall are toxic asf. Every woman deserves to be treated nicely #RespectAriana pic.twitter.com/40Hzepprsu

Bishop Charles H. Ellis III belittled @ArianaGrande, suggesting she was a Taco Bell menu item, while physically locking her in awkward embrace and squeezing her breast. This has nothing to do with what she’s wearing and everything to do with his shameful refusal to #RespectAriana https://t.co/KEbxaeUIdj