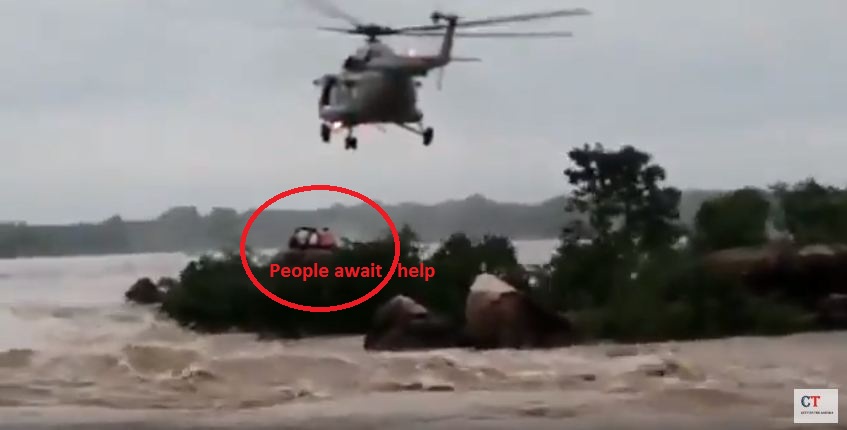 Watch the video of the rescue done by Indian Air Force:

Indian Air Force has released a detailed statement on the same, which we are presenting verbatim:

On Sunday the unit got a message to launch helicopter for an urgent rescue mission. The Mi17 V5 was prepared & the crew got airborne in the shortest possible time. The mission was to save lives of 08 fishermen who lost their boats due to flood and were hanging on to a raised area.

The crew navigated to the coordinates, but they could not find any stranded people. The Crew decided to carry out a recce along the flooded river and they spotted some people, stuck on a high ground.
The Aircraft was brought to rock steady Hover and the GARUD commando was winched down, but due to the strong flow of water and strong winds, chances of disorientation were high.

A quick analysis of the situation by the crew and a decision to carry out low hover close to the people was undertaken. Keeping clear of nearby trees, low hover was done and all the EIGHT stranded people were picked up to safety.

The aircraft was launched from Air Force Station Gwalior at 1635H, rescue was undertaken at 1830H close to sunset and the aircraft landed back on Night Vision Goggles at night, 1915H.