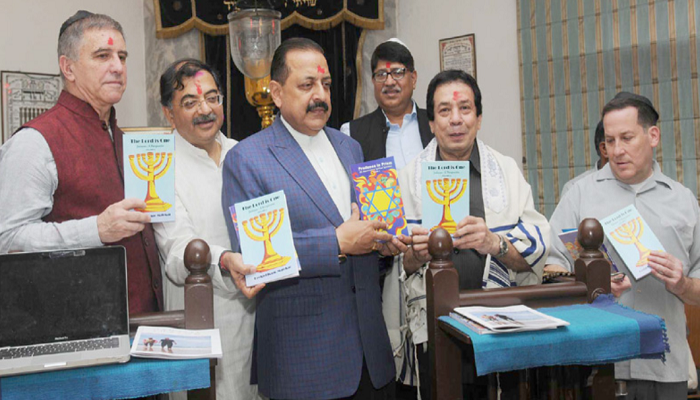 The Union Minister of State (Independent Charge) of the Ministry of Development of North Eastern Region (DoNER), MoS PMO, Personnel, Public Grievances & Pensions, Atomic Energy and Space, Dr Jitendra Singh on March 2nd, 2018,  launched the social media segment of Namaste Shalom, a magazine devoted to India-Israel relations in New Delhi. The launch day of Namaste Shalom was auspicious as well, as the festive occasion of Holi coincided with the Jewish festival of Purim.

Speaking on the launch of Namaste Shalom, Dr Jitendra Singh said that there was a natural bond between Israel and India, who shared rich cultural and economic relations. They had faced similar hardships as well as successes in the past which obviated the need for making any extra effort for bonding the two peoples, he added.

He said the recent visit of Prime Minister Narendra Modi to Israel vindicated the firm and deep-rooted relations between the two countries. He announced that a food processing centre with collaboration of Israeli expertise will be inaugurated in Aizwal, Mizoram on 7th March.

This will be the first such centre in the North East region of India that is being established with Israeli collaboration. Set up at a cost of Rs 8-10 crore, this centre is exclusively for processing of citrus fruits. The project has been set up with the tripartite collaboration of Ministry of Agriculture and Farmers Welfare, Government of India, Government of Israel and State Government of Mizoram. Though located in Mizoram, this centre will cater to the whole North-East. There are 22 such operational centres in India including in the states of Haryana, Gujarat, Madhya Pradesh, Rajasthan and Punjab. The first centre was established in 2008 in Haryana. Daniel Carmon said that in the long run, Israel wants to establish one such centre in each state of India.

Chinese condoms are ‘too small’ for Zimbabwean men!