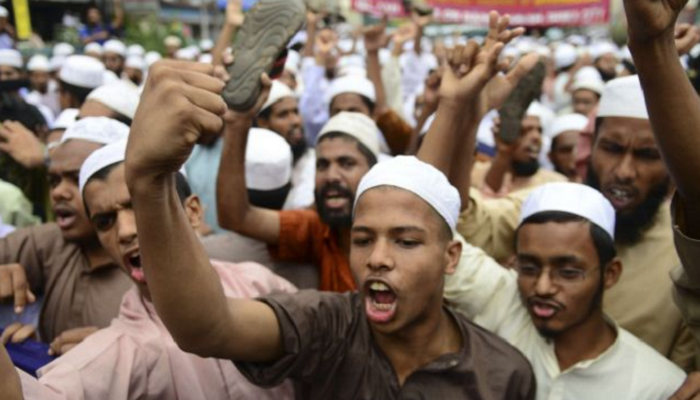 Sylhet, Bangladesh was tense due to an Islamist attack on the ISKCON Hindu Temple. The Temple stands at the Kajal Shah area of Sylhet.

The attackers used bricks, glass and also stones to launch an attack on the pretext that the ISKCON Hindu Temple disturbed their Jumma or Friday prayer.

Eibela reported that this devastation was caused after the gathered faithful were asked by the Mosque Imam to march towards the ISKCON Hindu Temple as it was creating a ‘hindrance in the path of getting blessings from the Almighty.’

However, the Temple authorities, as per Eibela, say that it was a children’s drawing competition that they were conducting following which Hare Krishna mantra was being chanted. But the report says that the assembly was not even using the electronic mike while the Mosque was using the same all along. In short, the attack had no basis as it was unlikely that the level of noise made by Temple could be anywhere near that of the Mosque’s.

Due to timely intervention by the police, the devotees were mostly able to survive the attack with damage done to the Temple while two devotees, namely Suman and Rajendra Das got hurt.

Police had to even use rubber bullets as the menacing crowd got too close to the ISKCON Hindu Temple.

The video of the attack is equally shocking:

Update on the ISKCON Temple Attack

Bdnews.com, another big news site of the nation, has reported that the number of injured is higher than what was previously thought.

The pic of the injured women from the video, as per Bdnews24.com, is the former councilor Jebunnahar Shirin and she was identified by the Sylhet Metropolitan Police’s Deputy Commissioner Faysal Mahmud.

Faysal said that Muslims got angry due to Kirtan sound during their Jumma prayers and also alleged that the ISKCON members pelted back brickbats.

Currentriggers.com had earlier exclusively interviewed the Eibela Editor-in-Chief and he had given a detailed account of  the problems in Bangladesh:

As Hindu festival of Durga Puja is coming near, therefore, such attacks would now increase in frequency and intensity.

ISKCON priest assaulted in Bangladesh, fighting for his life