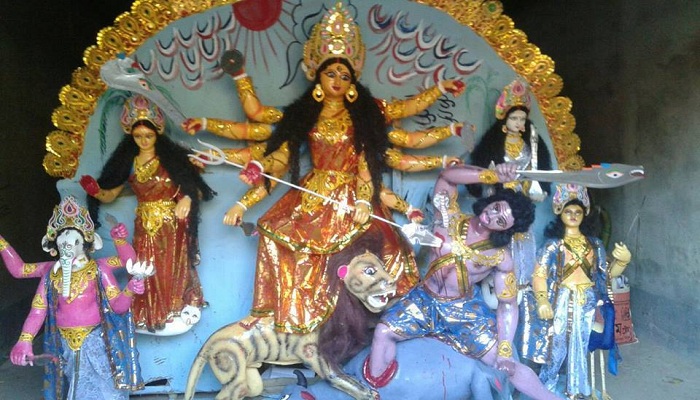 This Durga Puja was truly special for the people of Kanglapahari, West Bengal.

For last four years, the 300 hundred Hindu families were unable to perform the Durga Puja during the Navratri in a West Bengal village as the handful of the Muslims living in the village raised objections on the puja celebrations.

Kanglapahari, which falls in the Birbhum district of the West Bengal and falls under the Nalhati police station is a Hindu-dominated village and is near the Bengal-Jharkhand border.

But to the objection of the Muslims, the administration continued to deny permission to the Hindus in the village to do Durga Puja celebrations.

However, things went in favour of Hindus after Hindu NGO, Hindu Samhati stepped in.

These Pics of Durga Puja celebrations have been released by Hindu Samhiti.

The pictures are indeed special for the people of the West Bengal village.

Tapan Ghosh has openly pointed fingers at the Birbhum Police Superintendent N. Sudheerkumar and Anubrata Mandal. The Birbhum police have also come under the scanner with people wondering why Hindu families were denied permission to observe Durga Puja when it is part of the Bengali Hindu culture!

Unlike the pandals and decorations of the other places in West Bengal, this celebration may look very basic, but for the people who were denied even this much for thousands of days, this would be the most memorable Durga Puja of their lives.

Here are the best pics of the Durga Puja in 2016 and they are from a small village in West Bengal:

Hindus get relief, may celebrate Durga Puja in this West Bengal village