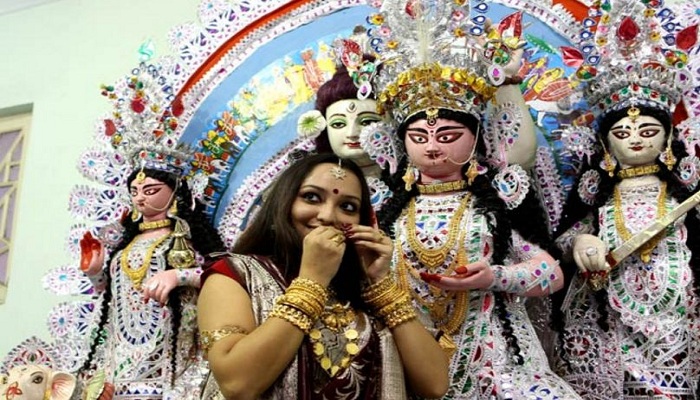 For last four years, the 300 hundred Hindu families were unable to perform the Durga Puja during the Navratri as the handful of the Muslims living in the village raised objections on it.

Kanglapahari, which falls in the Birbhum district of the West Bengal and falls under the Nalhati police station is a Hindu-dominated village and is near the Bengal-Jharkhand border.
But to the objection of the Muslims, the administration continued to not give permission to Hindus in the village.

However, things went in favour of Hindus after Hindu NGO, Hindu Samhati stepped in to help them.

Yesterday, Tapan Ghosh, the leader of the NGO said that some relief has been provided to the Hindus in the area. He said:

In the Birbhum’s Kanglapahari Durgapuja case, we got little favorable judgement from the court of Hon’ble Chief Justice of Calcutta High Court. Court ordered Hindus to perform Durgapuja inside any Hindu’s house at Kanglapahari for this year. As I understand, this is interim order. The main hearing of the Writ Petition will be heard after Durgapuja vacation.

Objections of 25 Muslim families more important, administration asleep on the rights of the Hindus:

The local administration has been accused of appeasement policies as Hindus are being denied their religious rights in a Hindu-majority area.

The Hindu NGO, Hindu Samhati, has also taken up the case of the jailed rationalist blogger Tarak Biswas who is inside after he committed Blasphemy against Islam.

Tapan Ghosh spoke on it and said “that the bail petition of Tarak Biswas has been granted in Calcutta High Court in the room of Hon’ble Justice Joymalya Bagchi. Adv. Tirthankar Ghosh was our lawyer. We are happy. But Tarak is now in Tamluk jail, far away from Kolkata. He has two cases against him in Howrah & Tamluk court. So, some more time is required to free Tarak.”

Tarak’s case is much like the case of Kamlesh Tiwari, a Hindu Mahasabha leader who has been under detention since December 2015 for alleged blasphemy against the Prophet of Islam.

The Allahabad High Court has quashed the detention order of Tiwari under the National Security Act. The judgement was delivered by a Division Bench of Justice Anant Kumar and Justice Narayan Shukla who heard the Habeas Corpus petition filed by him, through his wife.