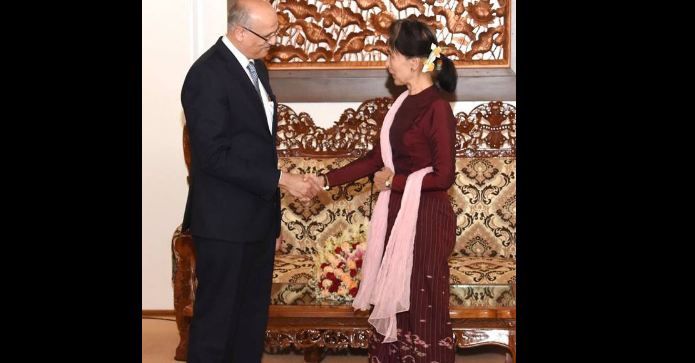 The Foreign Secretary of India, Vijay Gokhale, paid an official visit to Myanmar on 22 October 2018.

During the visit, he called on the State Counsellor, Daw Aung San Suu Kyi. All matters relating to bilateral cooperation as well as matters pertaining to international and regional matters of common interest, including developments in Rakhine State were discussed during this meeting, a press note said. Foreign Secretary also called on U Thant Sin Maung, Union Minister, Ministry of Transport and Communications and discussed matters related to connectivity and transport infrastructure being developed by India in Myanmar.

Following the meeting, Foreign Secretary and U Win Khant, Permanent Secretary, Ministry of Transport and Communications signed the MoU for the appointment of a private Port Operator for the Operation and Maintenance of Sittwe Port, Paletwa Inland Water Terminal and associated facilities that are part of the Kaladan Multi Model Transit Transport Project. This is a significant step in the implementation of India’s Act East Policy as its signing will enhance Myanmar’s connectivity including with India and add to the development of the whole region, particularly in the Rakhine and Chin States of Myanmar. It would also add to local infrastructure capacity and help in creating more job opportunities for the local people.

Foreign Secretary earlier also called on the Commander in Chief of the Myanmar Defence Services, Senior General Min Aung Hlaing. All matters relating to border security, bilateral cooperation, Myanmar’s peace process as well as the situation in Northern Rakhine State were discussed during the meeting.

Foreign Secretary conveyed the message in all his engagements that India valued its relationship with a close neighbour like Myanmar and would continue to deepen its cooperation with it in the areas of connectivity, security, people to people relation and economic and commercial cooperation.