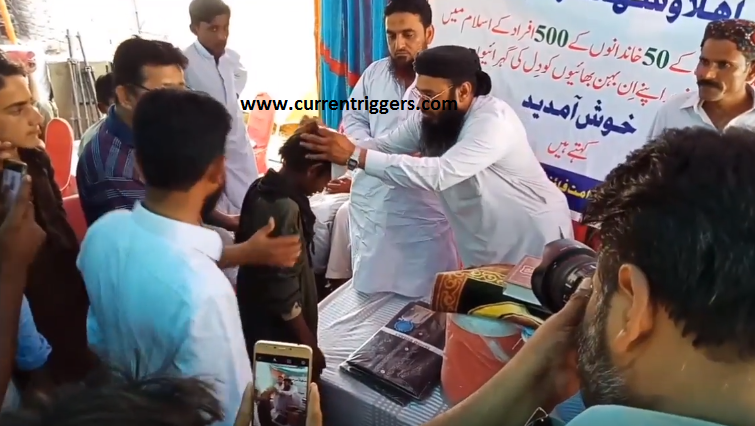 As was expected, on March 25, 500 Pakistani Hindus including children were forced to convert in Sindh.

Several of these Pakistani Hindus had come to India citing religious persecution but were forced out of India as they did not have long-term visas.

Peer Mukhtyaar Jaan Sarhadi, Peer Sajjad Khan Sarhadi, and Peer Shakir Khan Sarhadi were present on the occasion. These 500 people belong to the 50 families and had minor children and women as well.

The moment these Pakistani Hindus had entered Pakistan, it was believed that now they will have no alternative but to convert to Islam.

In 2015, I had written that the Pakistani Baghree Hindu community wanted the Indian government to allow them to seek refuge in India. This was my observation then:

“Close to 400-500 families wish to come to India as soon as is possible. Why? Because Hindu girls, of any age, are being abducted openly and no one does anything. One of the daughter of the Baghree community, a married woman named Chandervati along with her 2-year old daughter, was abducted by armed gunmen and force-converted at Amrot Shareef, married to a criminal, and later shoved into prostitution. But Pakistani establishment, instead of helping the victim arrested her father, her mother, and six other family members of the victim’s family because the ‘abductor-cum-husband’ claims that her family kidnapped her to take her away from him.”

Interestingly, after India’s Narendra Modi government stored to power in 2014, it was believed that it will do a lot more to change the Pakistani, Bangladeshi, and Afghan Hindu and Sikh refugee citizenship issue which often stops them from seeking shelter in India, but it seems a lot more needs to be done.