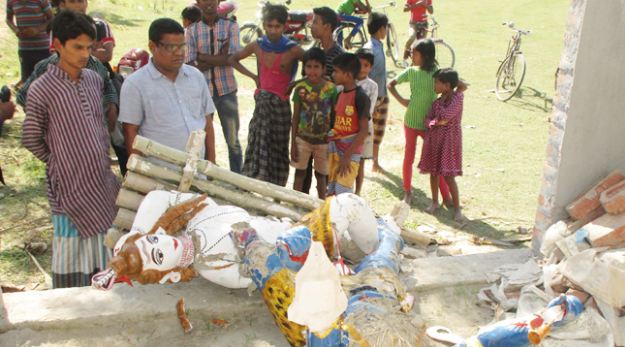 Bangladesh Hindus are under severe attack in the country as the administration has failed to stop growing Islamism that is threatening to make Bangladesh another Pakistan. Bangladesh Minority Watch has reported that statues of Hindu deities (Ma Kali ) were desecrated at village Pokati in the Thakurgaon Sadar Upazila of Thakurgaon District.

Bangladesh daily Jugantar.com also carried this news of the latest attack on the Bangladesh Hindus.

Perpetrators smashed the deities on the ground and also set fire to the Hindu God Lord Vishnu’s Temple.

Hindu communities at Thakurgaon Sadar have become frightened while the police is patrolling the Temple area.

As per statements of Chakra Mohan Sarkar, President of Bishnu Mandir at Pokati village, a Kali Temple was set on fire and deities were broken and desecrated, he also said the valuable goods were also set on fire.

Advocate Rabindra Ghosh, on behalf of Bangladesh Minority Watch, contacted with Officer in Charge of Thakurgaon Sadar police station who said that Bangladesh Hindus are behind these attacks.

The Officer in Charge Moshiur Rahman also said that the complainant of the case is not interested in detaining a UP Chairman belonging to the opposition party BNP (Bangladesh Nationalist Party).