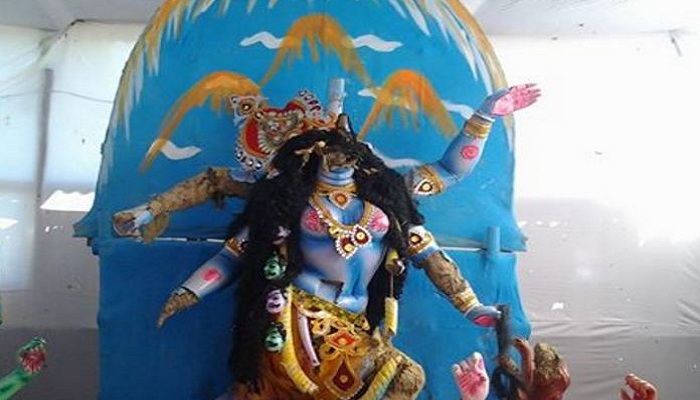 Violence against the Hindu community is refusing to die down as another Hindu Temple got desecrated in Bangladesh.

Ittefaq.com.bd  also covered this news while Bangladesh Minority Watch (BDMW) reported that Hindu statues at the Kali Mandir standing at the Serajgonj Sadar Upazila of Serajgonj District were smashed and desecrated on Saturday night (06.11.16) by unknown perpetrators.

On 06.11.16, the Hindu Temple faced unprovoked violence at Kundabari and the Deputy Commissioner Quarunessa andthe Superintendent of Police Mirajuddin Ahmed of Serajgonj visited the spot.

Hindu community has demanded that they be given security as the violence is unbridled and is refusing to die down.

No one has been arrested till writing of this report.

BDMW spoke to Basudev Sinha- Inspector-in-Charge of Serajgonj Sadar police station who claimed that necessary steps will be taken on the basis of First Information Report (FIR) which has been launched by one Adhir Chandra Poddar.

Basudev also reasured that very soon the perpetrators would be arrested.

Meanwhile the Hindu community elders who met the Bangladesh Minority Watch are aprrehensive of their survival.

At Nasir Nagar-Brahmanbaria, Hindu victims were in tears when they told the Bangladesh Minority Watch team about the violence they faced at the hands of Islamists and wondered how they would be able to live peacefully with the Musim neighbours in Bangladesh.

Bangladesh police have arrested Babul Howladar in connection with a Hindu Temple desecration case. He smashed and desecrated at least 9 Hindu deities at Banaripara Central Horishava at Barisal District on 04.11.2016. The Daily Jugantor reported on his arrest.

The criminal was arrested after a CCTV footage nailed him and Babul Howladar was arrested from village Noruttampur within the Upazila of Barisal district.

Bangladesh Minority Watch communicated with Mohammad Zeaul Hasan, Officer in Charge of Banaripara police station, who said a case has been started by Bibekananda Kundu before the police station. However, the minority watchdog found the case weak as the case was filed under section 295/297 of the penal code and demanded that the police insert section 295A of the penal code which would have ensured stricter punishments.

India wakes up to the plight of Bangladesh Hindus, albeit late

In response to a plea, Sushma Swaraj, India’s External Affairs Minister said that she had asked the Indian High Commissioner in Dhaka to call on the Prime Minister and express our grave concern about the situation. But considering the recurring attacks, it seems the situation is indeed out of hand:

the safety and wellbeing of the Hindus in Bangladesh. @templetree1 /2

You May Want To Check: