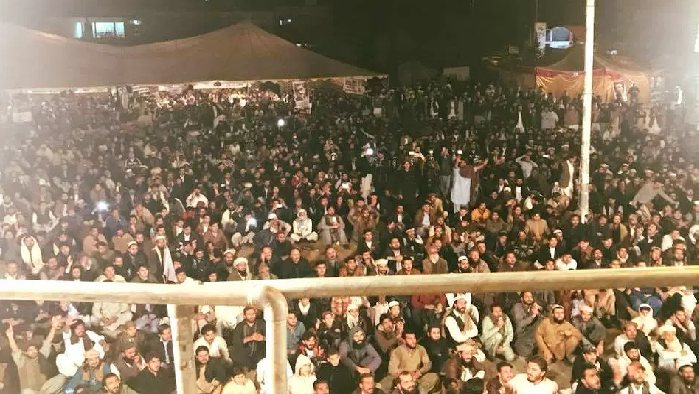 Pashtoons are again struggling in Pakistan. On 12th January 2018, an innocent Pashtoon named Naqibullah Mahsood was murdered after claiming that he was a terrorist. First, the Pashtoon activists and I raised our voice through social media but now in Khyber Pakhtunkhwa and other tribal areas, Pashtoons came together and it resulted in the Pashtoon Long March that we know today.

This Pashtoon Long March has even reached the capital of Pakistan, the Islamabad, and now a sit-in is going on.

When the Pakistani forces started the Zarb-e-Ajab military campaign in the Tribal areas, from then itself I was keeping an eye on the developments. It was important to act against the militants but for that millions of Tribal community members were displaced and had to be shifted out to other areas of Pakistan.  These people were called the ‘Internally Displaced Persons’ and financial aid was provided. Many Hindus and Sikhs families were also part of the Internally Displaced Persons (IDP).

But when, after the Zarb-e-Ajab, these IDPs returned to their native lands, they found only boulders and dust. Pakistan had even used minefields in several areas, due to which many innocent Tribals lost their lives and this is still going on.

This has led to a feeling of anxiety in the hearts and minds of Pashtoon society.

When it was publicized that Naqibullah Mahsood was killed in a police encounter none believed because he wanted to be a model! He loved grooming himself and was popular on Facebook, so it was natural that no one would believe that such a youngster could ever become a terrorist!

When Pashtoons and other activists saw the flaws in the case, they started raising their voice and under pressure, the Police made an investigation committee. The committee gave its report which said that, indeed, Pashtoon boy Naqibullah Mahsood was not a terrorist and nor did he die after he fired at the police. But yes, there was one fault and that was that he was a Pashtoon.

This wasn’t the first time that an innocent Pashtoon was murdered in cold blood like this. It is said that many Pashtoons have been brutally murdered in the name of acting against terrorists.

The British had made a ‘Frontier Crimes Regulation’ law which Pakistan is lavishly using against Pashtoon community till now, however, such laws are totally against the universal principles on which modern human rights are based.

News with regards to ill-treatment of Pashtoons across Pakistan is the reality of our times. The Pashtoon community is feeling even more antagonized after Naqibullah Mahsood’s cold-blooded murder. Pashtoon Long March is their way of letting the Pakistani establishment know this.

People in the Pashtoon Long March are raising these five demands broadly:

I personally endorse these demands and they are justified and I request Pakistani government to agree to them quickly.

Pashtoons must continue to demand their rights peacefully, and I pray for their success.