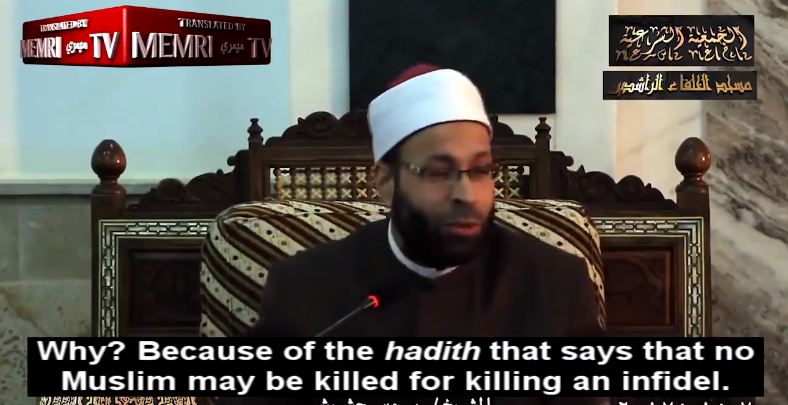 A video has surfaced which shows a Muslim cleric explaining why death sentence may not be given to Muslims should they end up murdering a non-Muslim.

Middle East Media Research Institute (MEMRI) has translated a video in which Egyptian Muslim cleric Samir Hashish was addressing the gathering at the Al-Khulafa Al-Rashideen Mosque on January 7, 2017.

This Mosque is near the Sixth of October City near Cairo.

Cleric Hashish was seen referring to a hadith in Sahih Al-Bukhari and said that Muslims should not be put to death for killing the infidels (non-Muslims).

He also added that some people end up using this hadith to justify killing non-Muslims. But he said that this was a distortion of the Hadith. He explained that this hadith merely means that the death penalty may not be applied in such cases, but other punishments should still be applied.

The Cleric added that Muslims are not put to death for killing infidels (non-Muslims/non-believers) because a Muslim’s blood is worth more.

MEMRI had earlier translated an interview of an Uyghur scholar in which he made some radical claims against non-Muslims.

Uyghur Sheikh Mahmoud Al-Azhari, who is also a member of the Islamic Scholars Association of Turkestan, referred to a verse in the Quran that says Polytheists – like the Chinese – hold the most enmity towards Muslims, and that the Jews hold this enmity as well.

#SaveRahaf: World unites to save 20-year old Saudi girl who refused to remain a Muslim