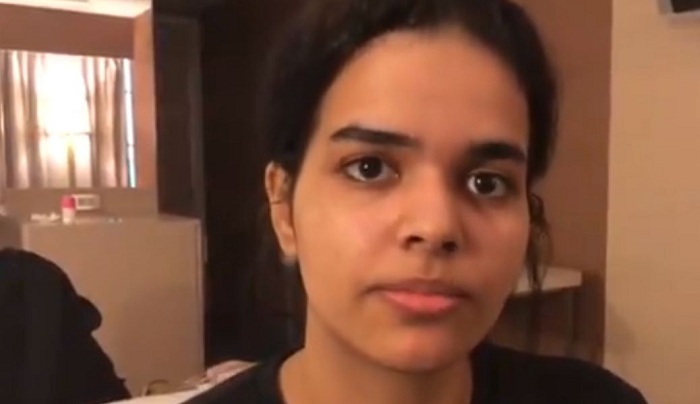 20-year old Saudi girl Rahaf Mohammed who is fleeing from Saudi Arabia where her relatives are threatening to slaughter her may get help!

UN Officials are interviewing her and the young Saudi girl may eventually get asylum somewhere her relatives could never reach her in the future.

Currently, she is in the kingdom of Thailand and stationed at a hotel near the famous Bangkok’s Suvarnabhumi airport where she barricaded herself. The Saudi girl was trying to escape to Australia to seek asylum.

She was stopped by the Saudi and Kuwaiti officers when she arrived at Suvarnabhumi yesterday afternoon and her travel documents were snatched from her says Human Rights Watch. The passport was taken away as she did not take permission from Wali or the male guardian for travel.

“They took my passport,” she told reporters adding that her male guardian had reported her for traveling “without his permission.”

In an interview to BBC, she said that she had renounced Islam, and said that she would be forcibly returned to Saudi Arabia and killed by her family. While conversion to Islam is encouraged and people are invited to embrace it, leaving Islam can lead to murder as it is considered one of the deadliest crimes in Saudi Arabia, the citadel of Islam.

A petition has also been created to save this Saudi girl.

Indian beaten up and arrested in Saudi for allegedly insulting Islam

There is some good news though! The Saudi girl has been taken under the UNHCR protection and hence, her family cannot harm her anymore. Here is what she wrote: