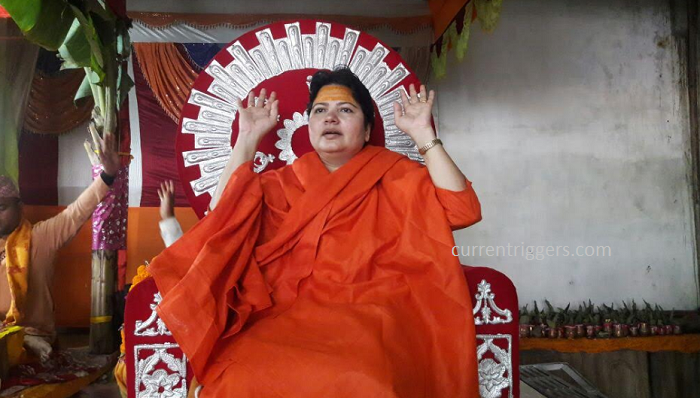 Sadhvi Hemanand Giri is the first woman to be shortlisted for the post of Shankaracharya out of the 200 candidates. The Sadhvi is from Nepal and is in the running for the Jyotish Peeth of Uttarakhand. This is an achievement in itself, no doubt. But why does she want to become a Shankaracharya?

Here she speaks exclusively for Currentriggers.com where she talks about the honor of the seat of Shankaracharya.

She says that in the Satyuga, the trinity of Brahma, Vishnu and Mahesh, honored Shakti like Durga, Mahakali and Mahasaraswati.

In this yuga also “I have searched and have not found that the ‘Matrshakti’ cannot become a Shankaracharya.”

Even in Kumbh the presence of Matrshakti is evident.

Sadhvi Hemanand Giri also called upon the Sant Samaj and others to see to it that the Matrshakti is given the honorable seat of Shankaracharya and to see a return and the honor of Matrshakti.

The saint believes that we need to return the pride and honor of Matrshakti which was there in the Satyuga and bring it in this age and time.

Know the woman who can soon be the Shankaracharya:

The Shankaracharya aspirant is of Nepalese origin. She was born in 2032 as per Vikram Samvat and her age is supposed to be around 42. She holds the degree of Acharya (Masters) and loves to sing and delve into arts.

Dalit and poor emancipation and women empowerment and rights are very close to her hearts and she has been providing free yoga diksha as she is the National Yoga Guru in Nepal. She wants to work for equality and wishes to see the crimes against women and children to go down.

During her conversation with me, she stated that the lack of respect for Matrshakti is leading to natural calamities like earthquakes. She believes that all this is possible by being humble but steadfast.

In her mind, she is clear that the division between different castes/sections of Hindu society in India and Nepal needs to be addressed and the society needs to unite. The Saint is the Mathadheesh of Gaurighat and has 4 Ashrams in prominent Hindu religious places like
Ayodhya and Mathura.

She has also stated that she wants to work towards strengthening movement against alluring conversion. While many may find it a little unusual yet, she may become the Shankaracharya with the full blessings of the electing body members who are following the rules set up by the Shankaracharya himself.

The news of her ascent has taken Nepal by the storm. Vijay Prakash Nishad of World Hindu Federation-Nepal met the Sadhvi and offered her respect on behalf of the entire team and the Sadhvi extended her warm admiration for this felicitation. But from then on, the felicitations have not stopped. In her last felicitation on January 18, 2018, the ex-Vice President of Nepal Parmanand Jha felicitated her while Hindu and Buddhist groups also came to pay their respects.

During this felicitation, the Sadhvi described Hinduism as the one deeply embedded in ‘Knowledge’ and ‘Science’ but also expressed concern over the influence of westernization which is making youngsters feel disenchanted. She challenged that there is no ‘superstition’ in Hinduism while others looked on.

Sadhvi was also sad that Nepal has become a secular nation and said that the time has come to make Nepal Hindu Rashtra again and for this, she said, the youth needs to be awakened.

Ex-Vice President of Nepal Parmanand Jha said that Nepal is Hindu Rashtra socially but it has been declared a ‘secular’ nation. He expressed sadness that despite understanding the aspirations of the Nepalese society, the Constitution framers did not understand this.

Breaking the glass ceiling: First time in 1200 years, the post of Shankaracharya could be occupied by a woman!