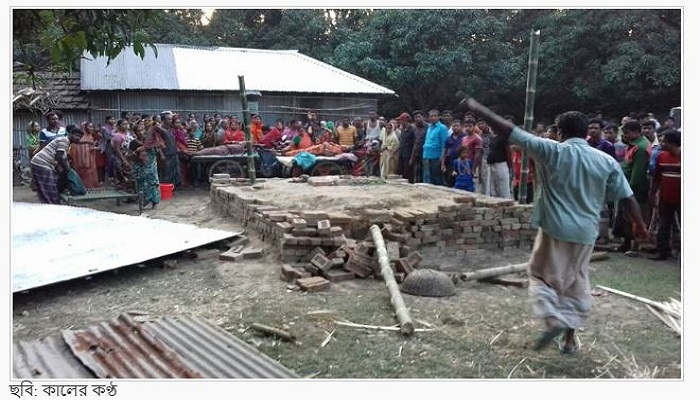 A group of perpetrators attacked a 30-year old Hindu Temple at Benodpur which falls in the Shibgonj Upazila of Chapainowabgonj District of Bangladesh yesterday.

About 5 Hindu victims got seriously injured and were rushed to the local hospital for treatment. Bangladesh daily “Kalerkhonta” dated 4th November 2018 also covered the news.

As per a report by Bangladesh Minority Watch (BDMW) that for the last 30 years the Hindus of the local area at Benodpur Union were doing puja within this Temple under a semi-pucca wall, recently the wall of the Temple started crumbling and the Hindu devotees were repairing the wall which angered the local Muslims.

One Muslim perpetrator named Hefzul Alam along with his 15 to 16 accomplices launched an attack over the Hindu devotees with the intention of ousting them and grabbing the temple land.

Advocate Rabindra Ghosh of BDMW communicated with Officer in charge of Shibgonj Police station, but the police did not respond. He then communicated with Mahabub Alam Khan, PPM – Additional S.P. Chapaigonj who said that the Police is trying to give legal assistance to victims but said this incident is not serious.

On October 31, 2016, in Nasirnagar, Brahmanbaria district, a mob of at least 100 Muslims violently attacked a Hindu village citing some cooked up blasphemy. This attack during the Diwali time left dozens injured and many Hindu temples were attacked.

Such was the state apathy, that even a senior minister ended up abusing Hindus when they went to him for justice.

WWW.Currentriggers.Com was one of the first to extensively document these heinous attacks.

Two Muslim groups—Hefajat-e-Islam and Ahle Sunnat—incited this violence. Later, an investigation by the governmental National Human Rights Commission found that this entire was actually a preplanned effort to push the Hindus out of the area and grab their Temples and land.