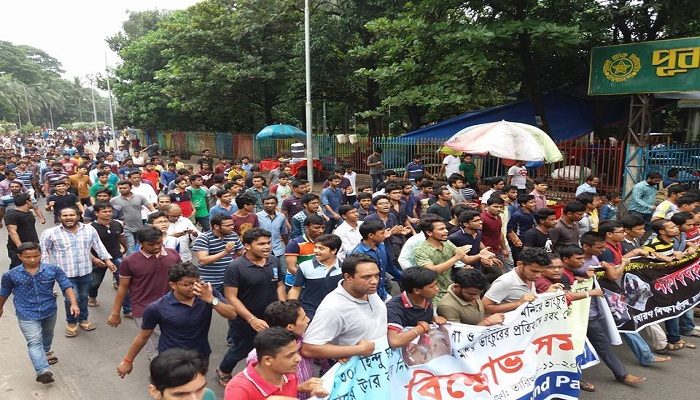 In his hate speech, Bangladesh Minister Mohammad Sayedul Haque showed contempt for Bangladesh Hindus worried about their safety and also lampooned media for giving access to their plight during recent Islamist attacks.

Interestingly, he is MP from Brahmanbaria, the place where Hindus in Bangladesh were severely attacked, women and children beaten and molested and Temples desecrated by the rampaging mob.After 72 hours of Islamist attacks, Bangladesh Minister Mohammad Sayedul Haque visited the area and gave this hate speech. Bangladesh Minister, a pivotal part of the secular Awami League led by India friendly Sheikh Hasina, delivered the speech but did not bother to visit the affected Hindus who were grieving their losses.

Meanwhile, Hindus have continued to protest against the coordinated Islamist attacks which have not stopped till now.

During the agitation at about on 12.30 PM the ruling party’s, Awami League, joint Secretary Mahabubul Alam Hanif (former PS of PM Sheikh Hasina) came and showed solidarity with the protesters.

Protesters, however, did not relent and told him that the Bangladesh Minister Mohammad Sayedul Haque should be punished for his vulgar and abusive remarks on the Hindu community. He was told that what was being said behind closed doors is now being said by senior Bangladesh Minister openly and there is not a murmur of protest from any quarters. The protestors have vowed more agitations till the time government does not take steps to control Islamists and their attacks on the minorities. Angry protesters also showed their shoes and footwear as a mark of protest but Hanif requested them to remain calm.

The protestors are saying that the government has not taken proper initiatives to protect the Hindus. The abusive Bangladesh Minister Mohammad Sayedul Haque was also criticized by the protesters who blocked “Shahbag Chattar” (important and busy traffic control point in central Dhaka ) for about two hours.

After the departure of Mahabubul Alam Hanif, the protesters blocked the “Shahbag Chattar” for more than one hour. More demonstrations will be undertaken by Hindu groups as Hindus reel under intense attacks.