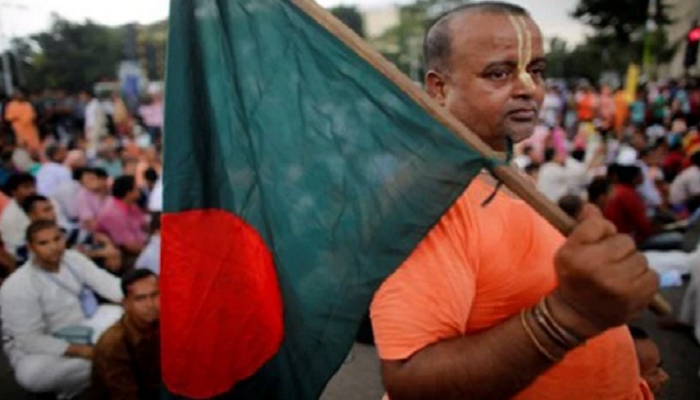 Unknown perpetrators attacked a Hindu Temple in Nithok Shialkhowa village in Kaliganj upazila of Bangladesh on 1st of September 2016. The Temple has been identified as the Sachchidananda Sebashram Temple and the desecration came to light after a worshipper named Sharat Chandra Roy, 58, spotted the iron decorative structure atop the Temple torn by someone and thrown on the road.

TheDailyStar.net, a leading Bangladesh newspaper, said the devotee was on the spot at around 6.15 am. The police are investigating the case but such attacks are increasing as the Hindu festival Durga Puja is coming near.

Earlier, another Hindu Temple desecration had angered the Hindu community after news came to light that the Hindu Gods and Goddess statues were desecrated at the Modonpura Union of Pal Para in the Boufal Upazila of Patuakhali district on Monday.

Perpetrators even threatened that those who do Puja would face dire consequences. The threat was given by a letter. Barun Paul- President of Puja Ujjapan Committee said that the incident occurred after the makers of statues went to sleep. The perpetrators smashed the statues and the letter of threat had abusive words directed at Hinduism.

Adv. Rabindra Ghosh of Bangladesh Minority Watch contacted Azam Khan Faruki- Officer in Charge of Baufal police station of Patuakhali district and he said a general diary No.815 dated 29.08.16 has been filed by Barun Paul.

Meanwhile, a Hindu family may soon get displaced and move to India as it is unable to withstand religious persecution anymore.

A widow named Shefali Rani has said that her lands have been forcibly taken away by the radicals and she has been threatened to leave Bangladesh and go to India.

Bangladesh Minority Watch tried to speak to officer-in-Charge of Sarishabari police station but no one is willing to take action against the powerful radicals. In short, more bad news is in store for the woman.