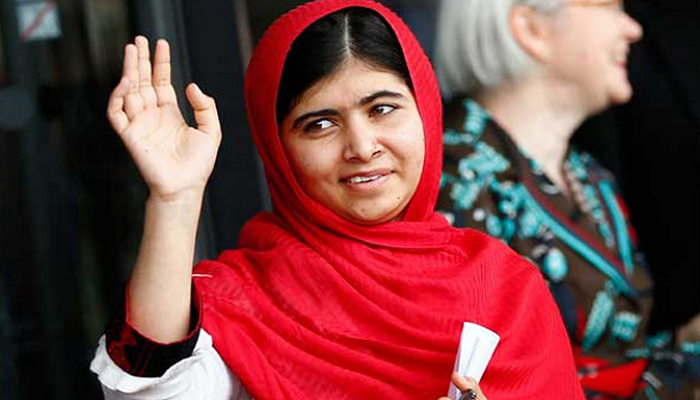 Malala Yousafzai may be unwelcome in Pakistan and may have almost gotten killed but she does know how to soak up all the propaganda the nation does against India. Is she clearing the pitch for her old dream of becoming Pakistan’s Prime Minister?

Considering that her icon is a known India-hater and female extremist, the suave and polished Benazir Bhutto whose first achievement is that she created the monster Taliban that is killing the Pakistanis now, the girl does have good potential in the traditional politics.

In her diatribe, Malala called upon UN, Pakistan, and India to stop the ‘inhumanity and heartbreak’ in Kashmir.

But the big question is that why is Malala failing to see the atrocities on Muslims done in Baluchistan, Pakistan occupied Jammu and Kashmir and Sindh by Pakistan?

Does Malala know about the target killings, the forced conversion of Hindus and Christian girls in Pakistan? Does she for a moment ever even feel guilty that while the Christian world gives her refuge, education and food to eat, she still remains silent on the atrocities that her nation Pakistan does with the Pakistani Christians?

Dear Malala, Can you please talk about the inhumanity and heartbreak in Pakistan-occupied #Balochistan? pic.twitter.com/nEoKAQfUuR

@TarekFatah Malala will never cry for this as this little #Baloch life was the enemy of Pakistan & was a "terrorist" pic.twitter.com/3lGTYgIill

Why is Malala silent on the atrocities done on Pakistani Hindu underage girls and boys who are raped, forced to convert and sent off to brothels never to be heard again?

What about the genocide of Bengali speakers in East Pakistan? Why is Malala silent on the atrocities that are done against minority Muslim sects and the harbouring of terrorists such as Hafiz Saeed and the murder of innocent Afghans by her nation?

Why is it that her concerns are always one-sided and why is her stand always with the abuser for human rights? She is worried about Kashmiris, but which Kashmiris is she talking about? The ones like Kashmiri Hindus and Sikhs who have been ethnically cleansed in Pakistan occupied Kashmir?

Will request @Malala to talk about the ethnic cleansing & genocide of an entire race of #KashmiriPandits.U wr & still silent. #KashmirTalks

Or does she want to also speak on the Indian side of Kashmiri Hindus and Sikhs who have been maimed, murdered and driven away by, yet again, Pakistani sponsored terrorists who aim to make this state another Pakistan where minority lives matter as little as that of a goat? She can speak as much as she wants, but India will no allow Kashmir to become another Pakistan. That is a firm resolve of every Indian.

Here is the English-speaking foreign educated, Pakistani Prime Minister Benazir Bhutto calling for struggle in Islamic vocabulary; anyone who can understand this will know that she was urging the ‘Muslims’ to take up arms against non-Muslims:

So much for the farce of being a ‘liberal.’

Malala is indeed slowly acting on her old dream of becoming PM of Pakistan in Benazir style (ready to nurture extremist elements for gaining political points in a radicalized nation) but she should know that a foreign-educated woman will always remain an unwanted species in the current Pakistani politics. So despite all this propaganda done by her and her team, she would still remain what she always was, a pariah for Pakistanis and now a pariah for every individual who wants democratic and not religious rules in Kashmir.

P.S.: Benazir Bhutto was also the one who on her state visit to North Korea in the year 1993 smuggled in critical information and inputs on uranium enrichment. Pakistan denies any of this, but many experts including George Perkovich, nuclear expert with the Carnegie Endowment for International Peace, agree that all the assertions made against Benazir Bhutto were true. For more one can read “Goodbye, Shahzadi.” In short, Malala indeed is learning fast.