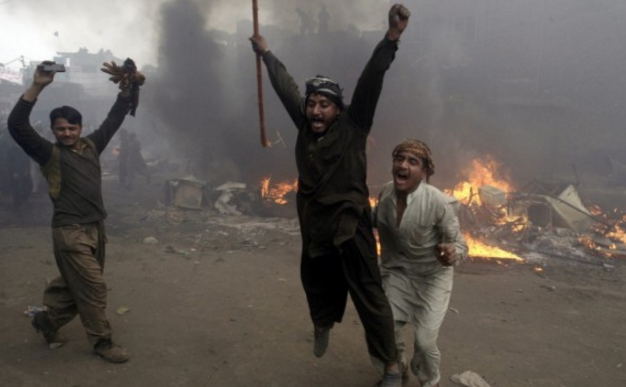 Sindh, July 27, 2016: While the Bharchundi Peers and other radicals are saying that a Hindu man committed the blasphemy by entering a mosque and setting fire to Quran the truth seems to be that the alleged Hindu man had actually converted to Islam four years ago!

There are also questions that how is it that the gathering of ‘Muslims’ inside the mosque did not do anything to stop the ‘Hindu’ man in a ‘Mosque’ from committing Quran desecration? Who saw the man committing the act and if not then how was he framed? Through CCTV footage or merely by clerics to settle scores with the minorities as it keeps happening nowadays? These are logical questions but it seems in Pakistan, Hindu is not going to be heard, yet again.

The Pakistani publications are hell bent on using the Hindu name Amar Lal to discredit the peace-loving minorities and are playing alongside the radicals by refusing to acknowledge the conversion that happened not now but four years back! There are several Muslims who recently have been converted but rarely use their Muslim names.

Even Pakistani starlet Veena Malik is more famous by her non-Muslim name.

Are these newspapers afraid that this incident shows that forced conversion and persecution, that the Muslim clerics employ to make people convert their religion, is a double-edged sword?

In any case blasphemy against Quran by Muslims is not unthinkable, in Rimsha Masih case, it was pretty evident. There are also Muslims who openly mock other religions but rarely get booked for their crimes while the minorities such as the Hindus and Christians are targeted by the radicals in connivance with the political parties.

Daily Awami Awaz is a secular Sindhi newspaper which has given full coverage to the Quran desecration incident and brought this fact to life that the alleged Hindu is actually a converted Muslim!

The alleged desecrator was handed over by the Mehrab Samejo villagers and conveniently a huge number of Muslim protestors, in no time, descended to block the National Highway for 6-hours. How is it that such a huge number of people can work in coordination when the rumor has merely traveled from one ear to another? Does it not smell of a sinister campaign against the minorities in a Muslim majority nation? First, it was the Christian young man who was made to run from his house by his Muslim friend claiming that the Christian did blasphemy and now it is the Hindus who are merely 2% of the total population. These are tough questions and they must be sought answers for.

A First-Information Report (FIR) has been registered against the accused under section 295 (B) of the Pakistan Penal Code but nothing has been done for the Hindu victims who have been shot at and murdered by these protestors. So where should the Hindus go? Is this the Jinnah’s Pakistan?