Daudkandi Police station of Comilla District of Bangladesh was simmering with anger after it was found that someone had shit on Holy Quran. Angry Muslim community suspected the Hindus. This was reported by many Bengali dailies on 17th March but the culprit arrested was Mohammad Habibur Rahman. Bangla.moralnews24.com covered the news along with the picture. […]

Asad Chandio is a journalist and a human rights activist based in Sindh, Pakistan. He has been the force that has exposed brutalities done against Pakistani Hindus by extremists and has often treaded on the path where even angels fear to tread in this nation. He is a secular dyed in the traditions of Sindh and […]

Pir Abdul Haq aka Mian Mitho has been accused by the Hindu community of Pakistan of leading forced conversions campaigns that target underage non-Muslim girls and boys. These girls and boys go missing and are never found again as the judiciary and police turn a blind eye to the complaining parents. Now, Mian Mitho has […] 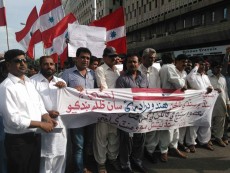 Sindh, July 28, 2016: Pakistani Hindus came out on streets to protest against religious extremism that has been unleashed over it after the allegations by the Bharchundi Sufi Peers that a Hindu man desecrated Quran. The man in questions had converted to Islam 4-years back after being tired of rampant persecution and is said to […]

Sindh, July 27, 2016: Bharchundi Sharif, a Sufi establishment in the area is instigating Muslim mobsters to attack Pakistani Hindus. The second village to be attacked is the Mirpur Mathelo district Pano Aqil of the Sindh. The attack has been led from Sufi dargah, an institution that has led forced conversion of Hindu girls and […]

Sindh, July 27, 2016: While the Bharchundi Peers and other radicals are saying that a Hindu man committed the blasphemy by entering a mosque and setting fire to Quran the truth seems to be that the alleged Hindu man had actually converted to Islam four years ago! There are also questions that how is it […]

Ghotki, July 27, 2016: As was being feared, due to lack of police protection for the Pakistani Hindus, extremists have started killing Hindu boys to avenge the desecration of Quran. While Pakistani Hindus were earlier rejoicing as a Hindu girl Aneela was able to win her liberation from her captors, now news has come that […]

Ghotki, July 26, 2016: An unknown person set fire to the Holy Quran and the burnt pages have created tensions in Ghotki, Pakistan, and the entire Ghotki has been shut down. Islamic clerics Bharchundi Peers are pointing fingers at the Hindu community which has made the community fearful of its safety. Many members of the […]