Donald Trump as Putin’s puppet? Yes! And at least the artist thinks so! 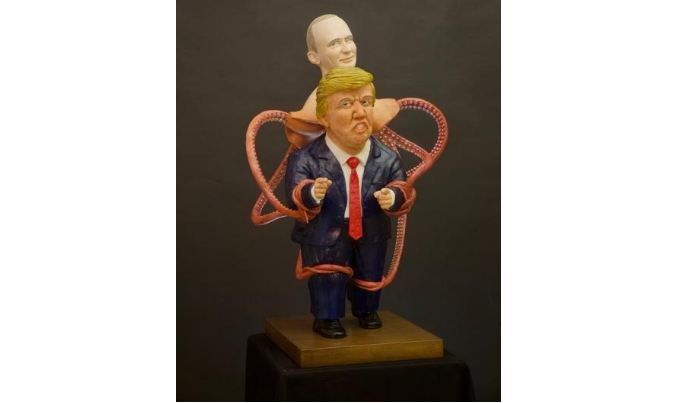 The sculpture, a freestanding 39” high acrylic painted urethane resin and polyurethane rubber cast, depicts the head of the Russian President, Vladimir Putin, atop the body of a wriggling octopus. Wearing an impish grin, Putin covertly wraps his tentacles around the bigheaded, small-handed, likeness of current US president, Donald Trump.

The analogy is clear; the octopus, a stealthy and cunning hunter, catches its prey by surprise and under camouflage. It consumes its food from the inside out, leaving only an empty shell behind. Its arms not only encircle the body of the US President Donald Trump but are also seen entering the figure’s pockets, suggesting not only a physical influence but a financial influence as well.

Wagman, whose family fled Communist Russia under Stalin in 1957, and later immigrated to the US, has a personal connection to the piece and felt it was important to make a statement on the current political climate between the US and Russia and provide commentary on the current leaders of both nations.

Donald Trump has repeatedly said that Russia has nothing on him and yet, the doubts remain in the minds of some. Meanwhile, in India, he is largely seen with favorable lense and people have nothing against him. In fact, his participation as the Chief Guest in the Republic Day Parade 2019 is likely to be watched real close by experts as he is considered more close to the Indian Prime Minister Narendra Modi than Barack Obama, who by the way, too was the Chief Guest for India’s Republic Day some years back.

Pamela Geller:  Donald Trump is the last hope to preserve the US as a free society