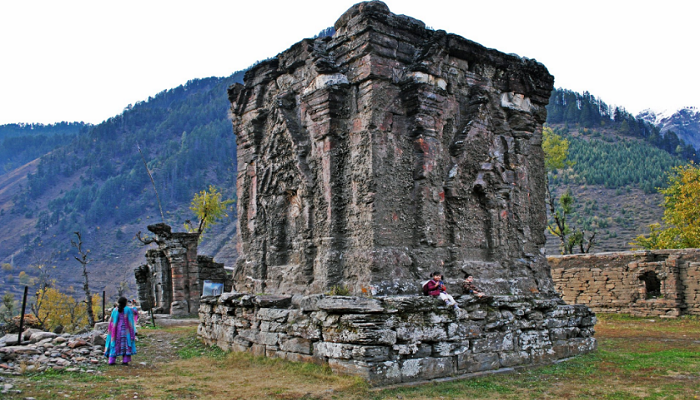 Various human rights groups met in Kashmir and Jammu yesterday and asked Indian Prime Minister, Narendra Modi and Chief Minister of the State, Mehbooba Mufti, to take up steps to facilitate the travel of Hindu pilgrims to the Sharda Temple which is situated in Muzafarrabad presently in Pakistan occupied Kashmir (PoK).

They requested the government to take up the matter of pilgrimage to the Sharda Temple with the Pakistani Government.

This news was carried in several newspapers of the state including the dailyexcelsior.com.

Will Mehbuba Mufti do prayaschit by demanding and canvassing the centre to liberate Sharda Temple in PoK?

Addressing a joint Press Conference organized by All Parties Migrants Coordination Committee (APMCC) and leaders of other groups from Jammu and Kashmir, it was said that “they have resolved to fulfill this long pending dream of Hindus to visit their most revered shrine in PoK and also warned those elements who were trying to divide Hindus on the basis of caste creed, color or region saying Sharda Mata Temple belongs to all Hindus.”

Will Mehbuba Mufti do prayaschit by demanding and canvassing the centre to liberate Sharda Temple in PoK?

A delegation of 'Save Sharda Committee #Kashmir' approached for resumption of annual "Sharda Peeth Yatra" to PoJK, which was suspended in 1948. Request put up before MHA for consideration. pic.twitter.com/SofL6zMuWq

It was also mentioned that the Save Sharda Committee leadership has already briefed the top leadership in the country including Mehbooba Mufti and Prime Minister Narendra Modi in various meetings on the Sharda Temple pilgrimage and all of them have assured that the issue will be taken up sooner. Sharda Temple currently is in a dilapidated state but it is believed that revival of pilgrimage will certainly help in the protection of this ancient Hindu heritage site.