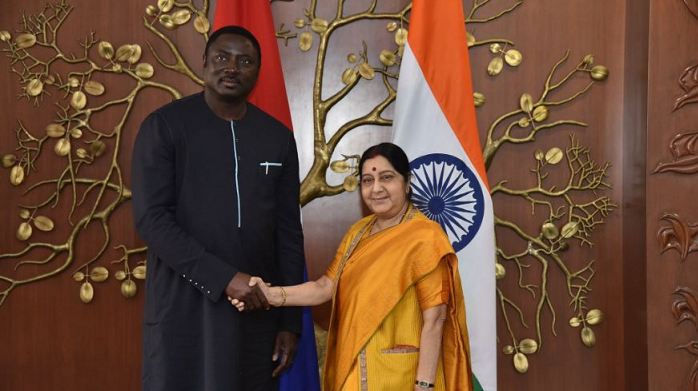 Mamadou Tangara, Minister of Foreign Affairs, International Cooperation of Gambia and Gambians Abroad accompanied by senior officials of his Ministry is in India from 7-12 March, 2019. The visit is in the context of 10th Anniversary of establishment of the Gambian High Commission in New Delhi and the 54th Independence Day celebration of the Republic of The Gambia.

The meeting was followed by the signing of a Memorandum of Understanding between the Foreign Service Institute, Ministry of External Affairs, New Delhi and the Ministry of Foreign Affairs, International Cooperation and Gambians Abroad, Republic of The Gambia.

Dr. Tangara also delivered a talk on ‘Multilateralism and its Role in Building and Sustaining Peace in Africa and Asia’ organised at the Indian Council of World Affairs in the afternoon.

India and The Gambia share cordial and warm relations and there is active cooperation between the two countries in the international forums, particularly in the UN.

The Gambia is also a member of the OIC.

The bilateral relations have witnessed greater engagement and momentum in the recent years. India is among the top trading partners of The Gambia. The Gambia is one of the beneficiaries of the Duty Free Trade Preference Scheme enjoying zero duty on nearly 95% of its exports to India. The Government of India has extended Lines of Credit of total value USD 78.58 million for various developmental projects in The Gambia. The National Assembly Building Complex in Banjul is one of the prominent projects in West Africa built under Line of Credit extended by India.