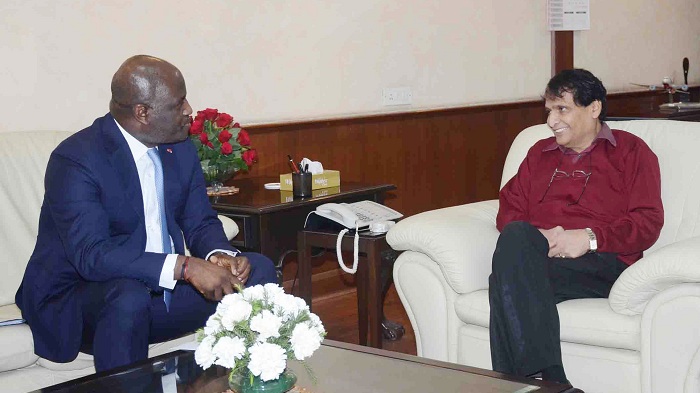 The Minister of Foreign Affairs, Republic of Gabon, Regis Immongault, called on Union Minister for Commerce & Industry and Civil Aviation, Suresh Prabhu, in New Delhi today. Commerce Minister while welcoming the Foreign Minister of Gabon said that India attaches lot of importance to its relations with Gabon and it will give all assistance to Gabon in order to fulfil the objective of Gabon to become an emerging economy by 2025.

Suresh Prabhu further said that it is possible for the two countries to work together in sectors like logistics, infrastructure, energy, water, agriculture, services and tourism. Suresh Prabhu informed the Foreign Minister of Gabon that bilateral trade between India and Gabon is currently valued at USD 440.47 million and is yet to realize its full potential. Both sides will have to work together to improve bilateral trade in the coming years.

For Maldives’ new government, it is India First

At present Indian companies are already operating in wood, plywood, mining and fisheries sectors. The Gabonese Foreign Minister said that Gabon is looking for stronger involvement of BRICS countries in the development of different sectors in Gabon.

Gabon has shown interest in entering into a Bilateral Investment Treaty with India. India has also urged Gabon to avail the offer of Lines of Credit (LoC) for developmental projects. As a member of the International Solar Alliance, Gabon is also eligible to avail LoC for solar projects.

India also suggested that Gabon may give a complete list of minerals for Indian industries to consider investing in for mining projects.

Gabon has the 6th largest reserves of Manganese in the world. It is one of the four countries in the world with high grade reserves along with South Africa, Australia and Brazil. It is the 4th largest producer, globally, of manganese ore with 11 % share in global production after South Africa (26%), China (17%) and Australia (15%). With large reserves yet to exploited, the Gabonese side is keen to develop this sector. Manganese Ore India Ltd (MOIL) team visited Gabon in July 2018 to explore possibilities of joint collaboration with Gabonese mining companies.

Gabon is also making efforts to attract investment from India in construction of railway lines in key mining clusters in Gabon. A feasibility study was conducted by RITES for one of the proposed lines. Both India and Gabon have agreed to send business delegations to look at opportunities for trade and investments.