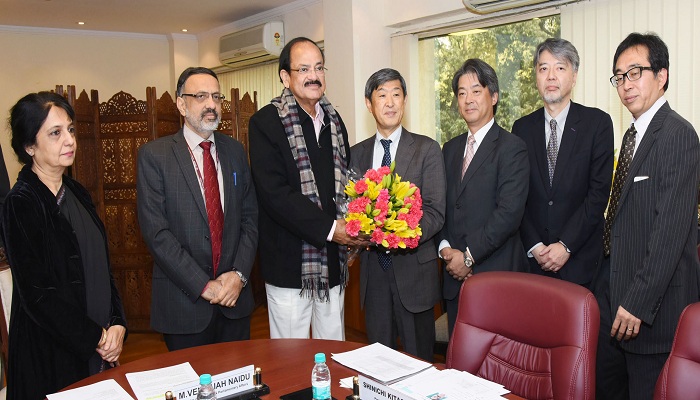 Responding to the issues raised by Naidu for further upscaling cooperation, Kitaoka assured that JICA would consider positively the suggestions including sourcing of equipment and rolling stock for metro projects from India in respect of projects financed by it, in consonance with the spirit of Make In India, reducing the time taken for appraisal of projects posed for financing, supporting new metro projects and speeding up the Varanasi Convention Centre Project.

Naidu said that JICA has been a reliable and longstanding partner in infrastructure development in India and would like further upscaling of this cooperation. He said that under Make in India campaign, several foreign and Indian companies have expanded their production bases in India and Japanese companies may be encouraged to do so. He also suggested that the project appraisal time being currently taken by JICA needs to be reduced in the context of growing emphasis on infrastructure development in India.

Seeking speedy execution of the Convention Centre Project in Varanasi for which JICA has agreed to give a grant of Rs.150 cr, Naidu said the Centre could be named as ‘India-Japan Friendship Convention Centre’ in recognition of the time tested and growing cooperation between the two countries.

“I have been associated with promotion of India-Japan cooperation for a long time and a friend of India. I met Prime Minister Narendra Modi yesterday and had useful discussions. In the context of Japanese Prime Minister Shinzo Abe emphasizing on infrastructure development in India further to his meeting with Prime Minister Mr.Modi, JICA would be happy to do the needful. We are proud of the impact of New Delhi on pollution mitigation and would be happy to be associated with new such projects as well. Japanese companies would be encouraged to set up their India bases to further Make in India efforts and also to increase procurement from Indian companies.”