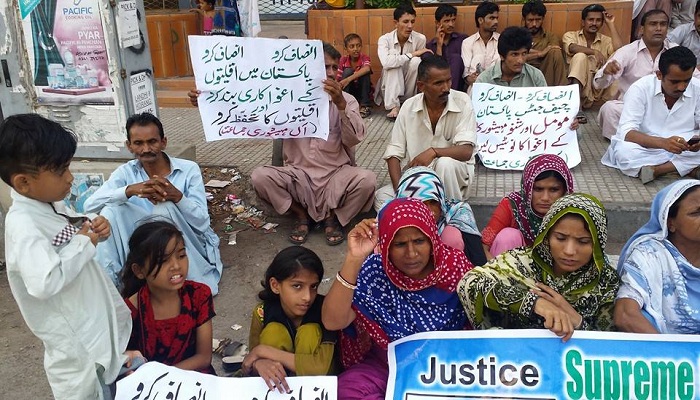 Pakistani Hindus were forced to sit on a hunger strike as the Sindh government failed to take notice of the many atrocities against the Hindu community which has been agitating against the abduction of the 5 years old Shanu and 14 years old Momal Maheshwari. The agitation took place outside the busy Karachi Press Club.

FIR against the kidnappers has been filed and the DIG Hyderabad has called the family and said that he has ordered the SHO to lodge FIR against kidnappers secular Sindhi nationalists Dada Magsi , Gulzar Magsi and others.

Pakistani Hindus are demanding that a law of conversion on the lines of Malaysia be made where no one below 18-years can convert to any religion without the presence of their parents.

To know the full history of the crime and the video of the mother demanding her daughter back, please click below:

Here it is important to state that many NGOs and human rights workers claim to work for the Pakistani Hindus yet no one can be seen when such atrocities occur. The same is the situation of the Hindu MNAs who are nowhere to be seen but are highly decorated in media as if they actually work for the community.

Due to these atrocities, many Pakistani Hindus are being forced out of their motherland to take refuge in India.