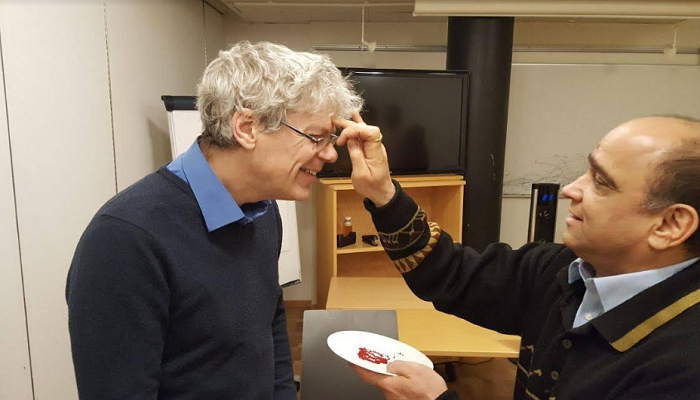 Hindus in Sweden is a new group which has been launched and their first event was on the auspicious day of Holi.

The event began on a positive note and was led by Chitra Paul, Rajesh Gaur, Somil Sharma, Pran Malhotra, Shrawan and Mohan Ranjan.

Henrik Rosen of the Swedish Christian Council was the guest of the evening.

The event started with the traditional Hindu coconut breaking ceremony by Mohan Ranjan, and later traditional color ‘gulal’ was applied to mark Holi.

The group discussed issues regarding human rights and cultural rights of the Hindu community and discussed various ways to work with an interfaith group and be cohesive to ensure inclusion of all Hindus and how they can be represented in Sweden.

Following are the objectives of the group:

Integration of Hindus in the Swedish society.

Hindu representation and knowledge of existence to the larger Swedish society, through database building and active member participation.

By arranging the cultural session in places of impact (School/ Social forum/combine shows).

By publishing or distributing approved material to promote awareness about Hinduism and its strengths.

Peace in the world.

Standing with Sweden and UN who are leaders in peace messaging on atrocities against Hindus.

Suggesting and actively helping wherever possible to bring a message of peace to unite all faith and make Sweden truly a secular place to live.

Hindus in Spain unite to make themselves heard!