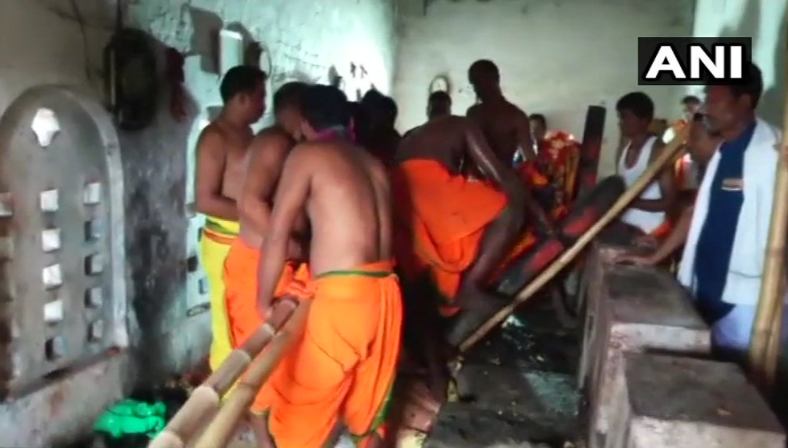 Ma Panchubarahi in Kendrapara’s Satabhaya village of Odisha is unique. There are other Temples that put restrictions on the entry of men too. But this time, let’s talk about Ma Panchubarahi Temple only where men are forbidden to even touch the five sacred idols of the goddesses and only married Dalit women of the local fishing community enjoy the privilege of performing the rituals.

For 400-years this was the case, but the taboo has been broken due to the rising sea level.

The rising sea level was threatening the very foundation of this Temple, hence the Dalit Priestesses of the Temple had no choice but to allow the male laborers inside the sanctum sanctorum so that they could transport the heavy black granite idols of the goddesses to safety.

Sabita Dalei, a Priestess told Times of India that they needed men as they wouldn’t have, otherwise, been able to relocate in time. She said:

“It is not possible for women to pull it off. We need many men and sculptors to move the idols.”

The exercise took place on April 20th when the 1.5-tonne idols of the deities were relocated by the male laborers to reach their destination in Bagapatia. A purification ritual was followed later on.

After 400 yrs, men were allowed to touch the 5 idols in Ma Panchubarahi temple in Kendrapara's Satabhaya village for a day on April 20, as the temple had to be relocated due to rising sea level.Only Dalit women have rights to perform rituals or touch deities in the temple #Odisha pic.twitter.com/mu21mSq4AS

The people of Satbhaya have complete faith on Maa Panchubarahi and believe her to be their protector and guardian.

In 2016, the district administration of Kendrapara gave a proposal to the government of Odisha to consider awarding Rs 15 lakh to shift this 1200-year-old Maa Panchubarahi Temple from Satabhaya to Bagapatia Rehabilitation colony right before the monsoon time due to the threat of sea erosion.

Reports state that a decade back, the sea was about a kilometer away from the Temple but due to the changing course of the Bay of Bengal, the Temple now stood just a few metres away from the sea. This relocation, therefore, is historical in many aspects.