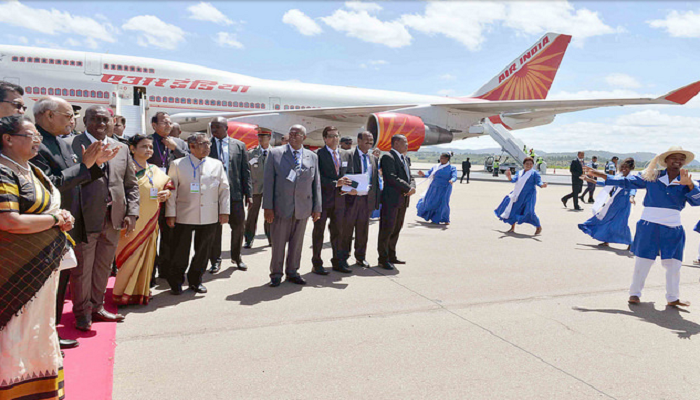 The President of India, Ram Nath Kovind, reached Madagascar yesterday (March 14, 2018) on the second leg of his two-nation state visit to Africa and the Indian Ocean Region. This is the first ever visit by a President or Prime Minister of India to this country. Flying in from Mauritius, President Kovind was received at the Ivato International Airport, Antananarivo, by Prime Minister Olivier Solonandrasan and accorded a ceremonial welcome.

The President said that he has come to the country with a message of goodwill. India is keen to enhance and strengthen its partnership with Madagascar. India has been sharing its developmental experience with Madagascar and happy to cooperate in fields of human development such as health, education and sanitation. He expressed hope that ongoing talks on health and traditional medicine collaboration would lead to fruitful outcomes.

He stated that India was glad to gift the “Bhabha-tron”, a cancer therapy machine, to Madagascar for improving healthcare facilities. Bhabhatron, the indigenous telecobalt machine, is one of the successful products developed by Bhabha Atomic Research Centre, Mumbai for cancer treatment. Bhabhatron was developed to meet the growing demand for affordable high-performance telecobalt machine.

The President said that India is ready to help in building infrastructure projects in energy, roads and port development, all of which are crucial to Madagascar’s development. We are keen to bring in expertise and replicate infrastructural success stories in other African countries through India’s LOC financing, President Kovind said. To facilitate its financial assistance programme, India has decided to offer Madagascar a USD 80.7 million LoC for agriculture and mechanisation.

The defence agreement between the two countries focuses on friendly visits by Indian ships to Madagascar, and capacity building and training of the personnel.

President Kovind also attended a luncheon banquet hosted in his honour by the President of Madagascar. Speaking on the occasion, the President thanked the Government and people of Madagascar for the warm welcome and hospitality. He was confident that the first ever state visit from India would open a new chapter in our bilateral relations.

In the afternoon, the President inaugurated the Centre for Geo-informatics Applications in Rural Development. This Centre will support communities in the host country in using geospatial technologies for a host of applications in rural development, and will strengthen bilateral cooperation in agriculture and related areas.

The President will interact with members of the India-Madagascar Business Forum, and then address students and the academic community at the University of Antananarivo before leaving for Delhi.