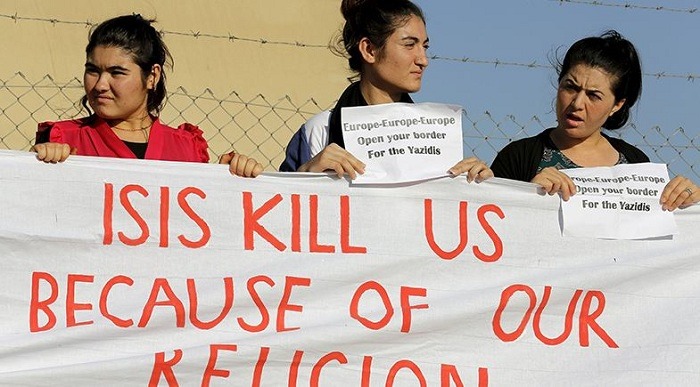 New Delhi, June 12, 2020: The 2018 Nobel Peace Prize winner Nadia Murad has accused the Turkey-backed militants of ‘silently carrying out a campaign of ethnic cleansing against Yazidis in Afrin, Syria. Detailing the crimes of the Turkey-backed militants she said that they are ‘kidnapping women, killing civilians, and destroying houses and shrines.’

Highlighting the lack of effort on the behalf of international spectators she said that they too have failed to bring attention to these crimes by the Turkey-backed militants.

The problem began as early as 2018 when the Turkish Armed Forces and its militant allies took control of Afrin in Northern Syria. Due to this attack, Yazidis had to flee for their lives to Lebanon, Europe and also to Kurdistan region of Iraq, a statement issued by Yazda notes.

One can imagine the plight of these refugees especially when the Coronavirus is engulfing precious lives across the world. Most Yazidi migrants and refugees are staying in bottleneck types of spaces with lack of social distancing measures which may further aggravate problems, as one of our previous reports concluded.

Yazda further states that the Yazidis in Afrin are being subjected to targeted harassment and persecution by the Turkish-backed militant groups. The Turkish groups are also forcefully converting the Yazidis to Islam and rape is being used as a tool to further persecute the already persecuted Yazidis.

Yazidis also face humiliation and torture, arbitrary incarceration, and forced displacement. Even coronavirus has failed to stop the Turkey-backed militants it seems.

Yazda also states another alarming fact that 80% of Yazidi religious sites in Syria have been looted, desecrated, or destroyed, and Yazidi cemeteries have been defiled and bulldozed.

18 Yazidi religious sites have been destroyed in Afrin, where Turkey-backed militants have a free reign.

The Yazidi groups, besides asking for humanitarian aid for the displaced people, are asking the world powers to pressure Turkey to withdraw all armed factions from the north and eastern Syria and halt the ongoing ethnic cleansing against Yazidis and other minorities in the region. They also have asked for a UN investigative team to north and eastern Syria to evaluate the situation and document atrocities committed by all armed actors against civilians.