The claims of Hindu exodus from devbhoomi Uttarakhand has sent shock waves across the nation. Sadhwi Prachi claimed that no less than 62 Hindu families have been forced out of Dhanpura village in Haridwar from another community. The village is around 40% Hindu. Sadhwi Prachi also said that there have been cases of Love Jihad […] 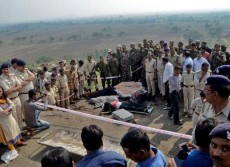 The National Human Rights Commission has taken suo motu cognizance of a media report that 8 SIMI under trial prisoners, who escaped from the Bhopal Central Jail were killed in an encounter with police in Bhopal, Madhya Pradesh on the 31st October, 2016. The Commission has issued notices to the Chief Secretary, Director General of […]

Kairana Hindu exodus which was earlier being slammed for being a lie and an attempt by some political groups to communalise the atmosphere has been found to be true by the National Human Rights Commission (NHRC). Kairana issue came to limelight after BJP MP Hukum Singh said that the exodus was on the lines of […]