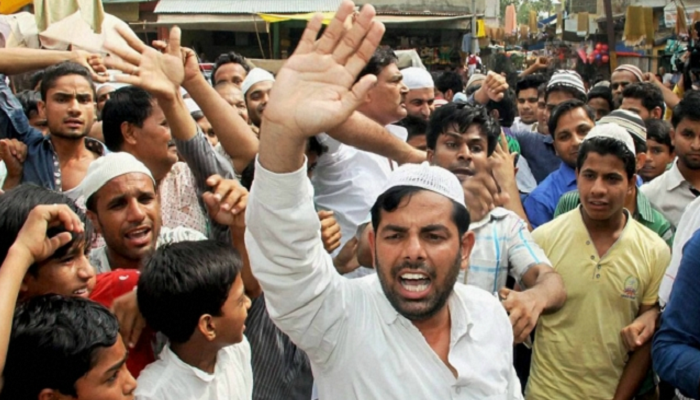 Kairana Hindu exodus which was earlier being slammed for being a lie and an attempt by some political groups to communalise the atmosphere has been found to be true by the National Human Rights Commission (NHRC).

Kairana issue came to limelight after BJP MP Hukum Singh said that the exodus was on the lines of what Kashmiri Hindus suffered at the peak of militancy.

For the Kairana report the NHRC considered the entire material placed on record, including the report of Investigation Division team of the Commission on a complaint that families of a particular religion are leaving Kairana area of Western UP due to fear of criminals.

The Commission has asked the Chief Secretary and Director General of Police, Government of Uttar Pradesh to submit an action taken on the observations and recommendations of the team within 8 weeks.

In a press note on Kairana, NHRC noted:

“The Commission received a complaint from Miss Monika Arora, Advocate, Supreme Court of India and convener of an NGO stating that families of a particular religion are leaving Kairana area of Western UP due to fear of criminals. It had been alleged that a woman belonging to Kashyap caste was abducted, gangraped and killed, yet no action was taken by the police against the offenders. Two of the businessmen viz. Shankar and Raju both brothers were shot dead by the criminals in broad day light in the market when they did not pay protection money to the criminals. A petrol pump was also looted in the area and when the police chased the criminals, the constable was shot dead and the criminals managed to flee. It has been further alleged that about 250 families have migrated and left their homes out of the fear of the criminals who enjoy political patronage. A Prayer has been made for immediate intervention by the Commission in the matter.”

Calling the allegations serious, a notice has been sent to the Chief Secretary, Government of UP and Director General of Police, UP calling for a report within four weeks. In the meanwhile, the Deputy Inspector General, Investigation Division of the Commission is requested to immediately depute the team of its officers for a spot enquiry in the Kairana matter covering all the allegations made and submit the report within two weeks.

The list of allegations on Hindu exodus in Kairana which have been found to be true are produced verbatim below:

1. It was found to be correct that the victim Smt. Guddi @ Surendri (Kashyap family), as mentioned in the complaint, was kidnapped on 4.4.2016 and was subsequently murdered by Kurban, Mohsin and others.

4. The IO (Investigaton Officer) of the case recorded the statements of Sh. Samaydin and Sh. Abbas of the same Village Akbarpur Sunheti u/s 161 Cr.P.C. on 8.4.2016 that they had seen Smt. Guddi @ Surendri along with Sh. Kurban, Mohsin, Sh. Ankush (nephew of victim Smt. Guddi) and Sh. Ramender (‘Devar’ of victim Smt. Guddi) last time on 4.4.2016.

5. Accordingly, the police started the search for all the 04 accused persons namely Sh. Kurban, Mohsin, Ankush and Ramender.

6. Subsequently, on 13.4.2016, the IO of the case arrested Sh. Kurban and Sh. Mohsin who also disclosed about the involvement of Sh. Ankush and Sh. Ramender.

7. On the other hand, Sh. Sangat and his family members claimed that their relatives Sh. Ankush and Sh. Ramender were working along with other family members and villagers in the sugarcane fields of village Bitana, Tehsil Gohana, District Sonipat, Haryana till 6.4.2016. However, police failed to arrest Sh. Mustafa and Sh. Abbas of his village even after he submitted a complaint in this regard.

8. The IO of the case also did not visit District Sonipat to verify whether Sh. Ankush and Sh. Ramender were working in the sugar can field of Village Bitana District Sonipat, Haryana as claimed by the Kashyap family.

9. The IO/SO of PS Kairana instead conducted a house search to arrest them and also made inquiry from the family members without the presence of any women police staff or any independent witnesses.

10. Smt. Munesh, mother of Sh. Ankush alleged that the police of PS Kairana during the night of 27-28/05/2016 misbehaved with her by picking her up from her cot when she was asleep in her night dress.

11. Subsequently, both of these accused persons were declared proclaimed offenders u/s 82 Cr.P.C., and Sh. Ankush and Sh. Ramender are still wanted by the police.

13. Some of the displaced persons also verified that it was one of the reasons for their migration from Kairana Town.

14. The registration of three FIRs u/s 294 IPC in PS Kairana by the police Const./SI on duty clearly proves that such incidents used to occur against the females of minority (Hindu) community.

15. The police record reveals that both Sh. Shiv Charan and Sh. Rajender (two businessmen) were threatened to pay protection/extortion money by the notorious gangster Sh. Mukeem Kala. Similarly, four other prominent businessmen of Kairana Market shown in the list issued by the Hon’ble MP Kairana at Sl.No. 2,3,5, & 17 have made the same allegations.

16. The notorious dreaded gang leader Sh. Mukim Kala had committed at least 47 cases of Robbery/Murder/ Dacoity/Extortion/Violation of Arms Act during the span of just 05 years from 2010 to 2015, in the States of UP, Haryana, Uttarakhand involving amount of crores of rupees and robbing of Govt. Arms/Ammunition.

17. Two petrol pumps of Hindustan Petroleum Company and of Indian Oil Company, were shut down 8-10 years ago in Kairana due to non-payment of money for the petroleum products by persons with criminal tendencies of Kairana and threatening the workers/owners of both the petrol pumps.

18. In 2013, the post-rehabilitation scenario resulting in the resettlement of about 25/30 thousand members of Muslims Community in Kairana Town from district Muzaffarnagar, UP, the demography of Kairana town has changed in favor of the Muslim Community becoming the more dominating and majority community. Most of the witnesses examined and victims feel that the rehabilitation in 2013 has permanently changed the social situation in Kairana town and has led to further deterioration of law and order situation.

19. Most of the witnesses stated that many families migrated due to threats pertaining to increase in crime and deterioration of Law and Order situation.

20. The DM & SP, Shamli and SO/Kairana did not provide the requisite record to the NHRC team regarding the movement of the police force on different occasions such as prevailing tensions between both the communities during religious processions, record of complaints received in their respective offices as requested vide letter dt. 18.6.2016. Accordingly, they were requested on the second day of the enquiry i.e. on 21.6.2016 but they still did not provide the requisite record.