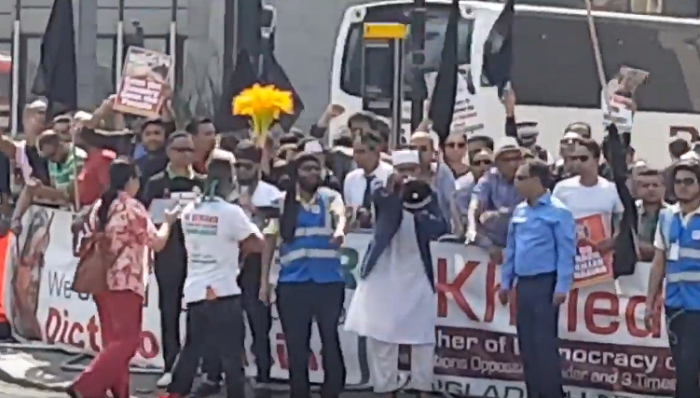 Bangladeshi Islamists have done it again, but this time they pulled the feat in London.

They insulted the Hindus by using holy Hindu chants in a derogatory manner while protesting in front of the Central Hall in Westminster during a public meeting on Saturday 21st April 2018 which had the Prime Minister of Bangladesh, Sheikh Hasina, in attendance.

The public meeting was organised to celebrate Bangladesh’s advancement from a Least Developed Country (LDC) to a Developing Country but the Islamists with their ties with the Bangladesh Nationalist Party (BNP) and far-right Jamaat-i-Islami Party (JI) descended on the venue and started using religious chants ‘Hare Krishna Hare Ram’ in a derogatory manner to mock the Hindu sentiments.

The chants of Hare Krishna Hare Ram are of devotional nature and are used to signify purity and an attachment to the supreme soul by the Hindus worldwide.

This mob wanted to incite religious hate against followers of the Hindu faith in both the UK and Bangladesh and also to ridicule and put Sheikh Hasina on the backfoot, who is considered far more sensitive with regards to the human rights of the minority community.

Worse they used cymbals and drums to mimic the followers of the Hindu faith and used the names of their Hindu Gods.

They even proclaimed that Sheikh Hasina as a Hindu deity hurting the sentiments of the Hindus while the London Metropolitan Police officers who were present on the site merely looked on even after being told that these slogans were nothing but a hate crime being committed in front of their own eyes.

Pushpita Gupta from the Secular Bangladesh Movement, UK in a press statement ‘strongly’ deplored the actions of these extremists and also denounced the failure of the police to stop this, which went on for no less than 2 hours.

“This not only has hurt the religious sentiment of the Hindu community in the UK but also encourages the religious bigots in Bangladesh to attack members of other religions. In the past whenever BNP and JI have come to power, they have attacked religious minorities and have caused havoc to their lives and properties.”

Pushpita Gupta said that this hate crime on the UK soil is even more worrying “as the acting leader of BNP, Tariq Rahman, is currently living in London for treatment and is also a fugitive from Bangladesh.”

She further said that if this hate crime against the Hindu community’s religious sentiment was undertaken in the UK under his instruction then he should be held responsible under the provision of religious hate crime act.

BNP and JI workers have been under the scanner for organized hate crimes against Hindus in Bangladesh but taking it to the UK is worrisome for not just Hasina but also UK government.

Just a few months back, Hindus were under attack on the allegations of committing ‘blasphemy’ against Islam by the Islamists in Bangladesh. Due to ongoing religious persecution by radical elements, Hindus have been forced to leave Bangladesh and migrate to neighboring India.

But even these Islamists have left the soil of Bangladesh and living in the foreign countries they refuse to mend their ways which is a huge challenge for the host nations.