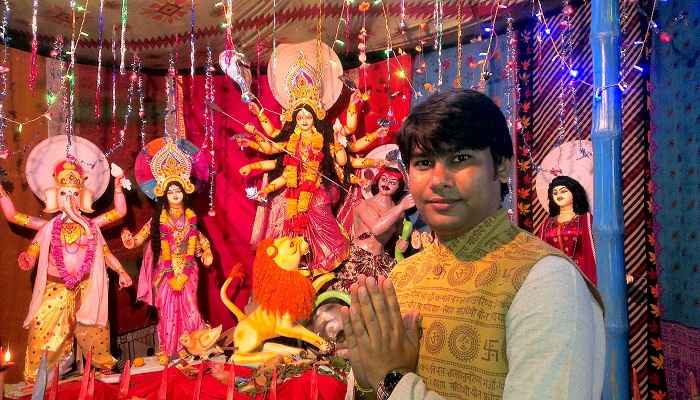 Currently, in the forefront of the Hindu protests against the Islamist attacks, Ripon Dey has emerged as a notable figure. But he has been involved in the human rights issues for long and has reported many cases of violence on the minority community. He was  also one of the leading organizers of National Mass Funeral Event for the martyrs of the Bangladesh liberation war, Gono Shradhyo 71.

Ripon Dey is a geek otherwise and is currently serving as the Chief Executive Officer of his own IT firm named Pollux Technology Solutions. We at www.currentriggers.com reached out to the young leader for an exclusive chat to understand the situation in Bangladesh:

Ripon, please let us know about the situation of Hindus in Bangladesh? Do they feel that they will get justice in the country?

Lands under Hindu possession get disposed by the government and by the Muslim majority by utilising black laws such as the Vested Property Act and the Enemy Property Act while the polarization and communalism in politics and the duality in the Constitution has affected the social harmony too. The Hindus are suffering worst financially, socially and mentally.

Even after the liberation of Bangladesh the communal and hate crimes committed against the Hindus do not see the light of justice. Fundamentalists are unleashing barbaric attacks such as rape, abduction, forceful conversion, murder arson etc. with impunity.

Majority understands and uses this impunity and is encouraged to continue such violations.

And what do Hindus do?

Hindus grapple with this reality and then resign themselves to their fate.

So as a young activist how do you see the response of the government and the secular forces towards current attacks?

My opinion is that the government is complicit when our homes and huts are being burnt and destroyed. And when the victims cry for help and look towards the government, a cabinet minister abuses and accuses the victims by claiming that it is the “Maluyans (Kafirs) doing excesses.”

Most of the people who claimed they are secular are not purely secular. I suspect that many are closet fundamentalists because they never undertook any concrete action or showed commitment towards human rights of Hindus. If they did, most of the problems of the religious and the ethnic minorities including Hindus could be solved.

We believe that Bangladesh was unique; it had the right markings of becoming a secular Muslim state. Then what went wrong?

Almost everything. But after having a Hindu Chief Justice in the country’s highest court, I can hope that someday we can see a Hindu Prime Minister, a Hindu-led leading political party, a Hindu department head across different bodies of the government. But for this ,we have to go a long way and mitigate the discrimination, marginalisation, and persecution of Hindus in Bangladesh.

Bangladesh Minister Mohammad Sayedul Haque abused Hindu community. Has he been condemned by his party for his abusive words?

Party doesn’t acknowledge that he said such vulgar and hateful communal word and is asking for evidence. Now who in his/her right mind will expose this culprit and face the wrath of a mighty government and its party cadres?

So many houses burnt, Temples attacked, even children and women were assaulted by the Islamists in Bangladesh. Do you think Hindus or other minorities will remain safe?

If we depend on the pseudo secularist brigade then we will not bring any relief to the Hindus. One thing should be clear; attacks were carried out by the so-called Islamist including well-dressed young Muslim men and even Muslim women who covered their face with Borkhah. So we think equitable empowerment of Hindus across the economic and administrative spectrum coupled with serious de-Islamization of the country is needed.

Ripon how do you see neighbouring nation India’s silence?

Hindus are in a conundrum when it comes to India, because Hindus for ages hoped and relied on India for security but sadly India didn’t do much. Bangladeshi Hindus look up to India not only because it is a majority Hindu country but also because we have a spiritual connection. It is our unfortunate observation that India delayed its statement on the Hindu oppression in Bangladesh. After one week of the brutal attacks in Nasirnagar, Brahman Baria and other places, at last, on 6th November, BJP National Spokesperson, Dr. Bizay Sonkar Shastri met with Awami league General Secretary Mr. Ubaidul Kader Chowdhury and requested him to ensure the security of Hindus in Bangladesh. On the same day, the External Affairs Minister of India Sushma Swaraj directed the Indian High Commissioner in Dhaka to convey to the Prime Minister Sheikh Hasina India’s grave concern over safety and security of the Hindus in that country.

But BJP’s Rupa Ganguly had earlier praised Bangladesh and said Hindus are safe. What would like to say on that?

This is disgraceful. These kinds of statements create the further impetus for the culprits to attack the Hindus because they see their actions are indemnified.

What are the plans of Hindu groups in the coming days in ensuring justice for the survivors of the current violence?

Please permit me to admit that the Hindu groups in Bangladesh not in a formidable condition. But a ray of hope is they now don’t feel shy to sound proudly “I am a Hindu”. This voice is low now, but this aspiration is the source of our strength.

All we can do is make some noise, protest hard, don’t give up and bring this issue to the forefront of the world attention, but the action has to be taken by the Bangladesh government, which can control the situation instantly, however, that doesn’t mean that another incident won’t flare up in another part of the country. So we hope that the government will come forward to tackle it.