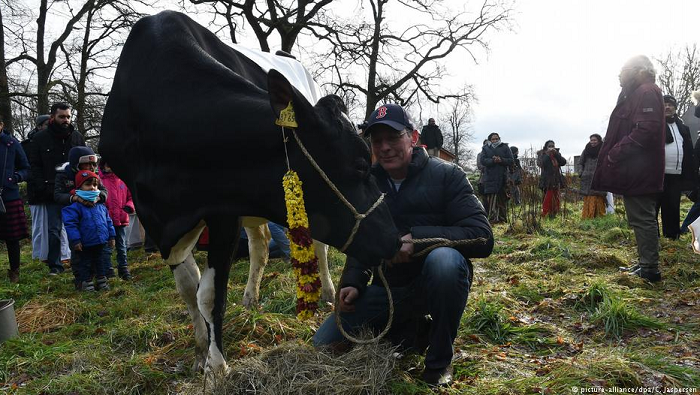 A cow gave her blessings for a Hindu Temple in Germany’s Bremen.

Cows are considered sacred in Hinduism and are even accorded the status of the ‘mother-figure’ to show gratitude to the benign living being which provides milk and companionship for the humankind.

As per a report published on 17th January 2018 in the newspaper DW.com, a German milk cow called Madel, who was brought to a proposed Temple site situated at the edge of Bremen, has given her consent for the building of the worship place. The local Hindus borrowed the animal from a farmer to find out if the land would be good for a Temple.

Indonesia: Why did the Princess of Java adopt Hinduism?

The report narrates that a Hindu priest and a group of Bremen Hindus guided the cow towards the land marked for proposed Temple.

The report also quotes community leaderPathmakaran Pathmanathan who told the German epd news agency that “If she (cow) stays there, it’s a good place to build a house or a Temple.”

It is important that the cow stays at the site as per her own will and show no signs of distress or discomfort or else the Temple site will have to be relocated. Madel lives with the local farmer Frank Imhoff and was first blessed by a Hindu priest and was given a garland, flowers, and a fresh piece of cloth.

The good news is that Madel indeed liked the land and so the construction is due to begin soon. Community leader Pathmanathan also told the press that “we will build the Temple here.There are lots of people here and yet the cow feels happy nonetheless.”

Pathmanathan told the press that the port city of Bremen has around 300 Hindu families and around 100,000 Hindu people currently reside in Germany.