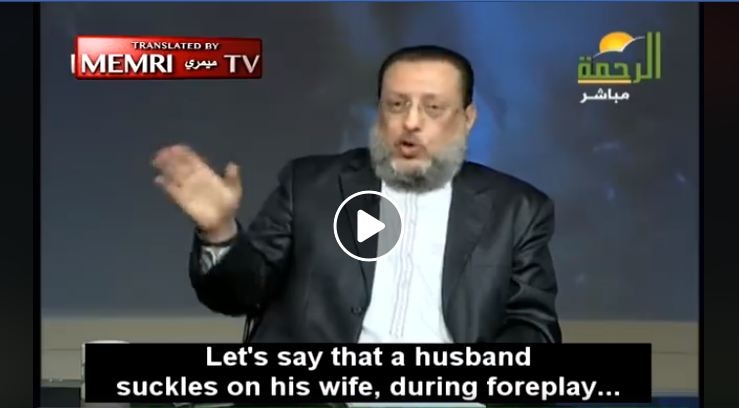 Comments made by a Muslim cleric from Egypt have become a talking point as he raked up a taboo topic ‘sex’ in the conservative Muslim country.

The Egyptian Muslim cleric Muhammad Al-Zoghbi made some comments on a show on Egyptian TV Al-Rahma on December 24th and he ridiculed the Muslims whom he termed as ‘fossilized fanatics’ for being restrictive when it comes to sex.

MEMRI has translated the clip from his statement where he can be seen telling the viewers that despite what some “fossilized [Muslim] fanatics” say, a woman does not become forbidden to her husband if he swallows some of her breast milk during foreplay.

These Pakistani models are redefining ‘sexy’

“Is it permissible for a husband to be breastfed by his wife? Let’s say that a husband suckles on his wife, during foreplay… Of course, there is no shame in talking about these things. Let’s say that he swallows some milk and it gets into his stomach… Does his wife become forbidden to him, like his mother? Some fossilized fanatics tend to say so, but this is nonsense, of course. When we deal with this kind of question, the rule is that the husband may enjoy his wife however he pleases. The only things that are forbidden are those prohibited by Allah: anal penetration and sex during menstruation or after giving birth. Apart from those things, everything is permitted by Allah.”

He added: “Stop making life hard on people! Let us all be moderate and fair.”

Egypt is a conservative Muslim country.

In 2006, Rashad Hassan Khalil, a former dean of Al-Azhar University’s faculty of Sharia had given a fatwa or the religious edict which said that being completely naked during sex annuls the marriage. While at the same time, another Muslim cleric claimed that a married couple should not be looking at each other’s genitals and to avoid the problem, they may use a blanket.