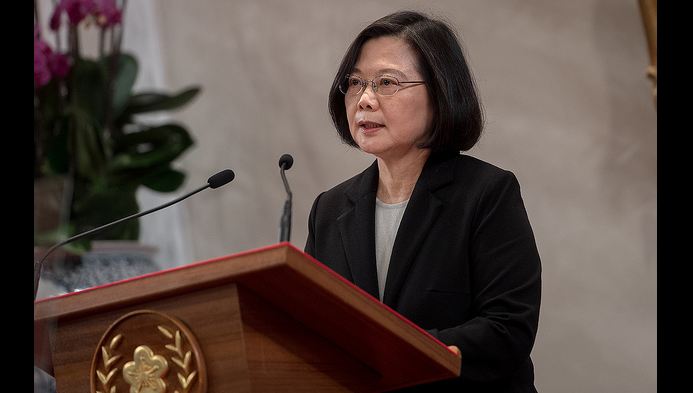 President of Taiwan, Tsai Ing-wen, on the afternoon of January 2 in the Presidential Office auditorium, explained the Taiwan government’s position on a speech delivered by China’s President Xi Jinping commemorating the 40th anniversary of the so-called “Message to Compatriots in Taiwan.”

Here is what she said:

“My fellow citizens and friends from the media, good afternoon.

This morning, China’s President Xi Jinping delivered a speech commemorating the 40th anniversary of the so-called “Message to Compatriots in Taiwan,” proposing further exploration of a “one country, two systems” scenario for Taiwan. As president of the Republic of China, I want to explain our position.

Next, we are willing to engage in negotiations. But as Taiwan is a democratic country, all political consultations and negotiations between the two sides of the Taiwan Strait must be authorized and monitored by the people of Taiwan, and conducted on a government-to-government basis by both sides. Under this principle, no individual or group has the right to represent the people of Taiwan to conduct political consultations or negotiations.

The development of cross-strait relations, as I said very clearly in my new year’s talk yesterday, requires that: China must face the reality of the existence of the Republic of China (Taiwan), and not deny the democratic system that the people of Taiwan have established together; second, must respect the commitment of the 23 million people of Taiwan to freedom and democracy, and not foster divisions and offer inducements to interfere with the choices made by the people of Taiwan; third, must handle cross-strait differences peacefully, on the basis of equality, instead of using suppression and intimidation to get Taiwanese to submit; fourth, it must be governments or government-authorized agencies that engage in negotiations. Any political consultations that are not authorized and monitored by the people cannot be called “democratic consultations.” This is Taiwan’s position, a democratic position.

We are willing, on the basis of “consolidating democracy” and “strengthening national security,” to conduct orderly, healthy cross-strait exchanges. I also want to reiterate that domestically, we need to set up a three-part security network for cross-strait exchanges comprised of security for people’s livelihoods, information security, and an institutionalized democracy monitoring mechanism.

Cross-strait trade and economic relations should be mutually beneficial, and promote mutual prosperity and development. However, we oppose Beijing making “benefitting China” its core focus, using United Front economic means including financial inducements to attract Taiwan technology, capital, and talent to move to mainland China. We will vigorously promote strategies and measures that strengthen Taiwan to consolidate a Taiwan-centric, Taiwan-first path to economic development.

Over the past two years, Taiwan has faithfully fulfilled its duty as a member of the regional community, actively contributing to cross-strait and regional peace and stability. We do not provoke, but uphold our principles. We have suffered many forms of suppression, but have never abandoned our fundamental position and commitments regarding cross-strait relations. I want to remind the Beijing authorities that a superpower must act with the demeanor and take the responsibility of a superpower, and international society is watching China to see if it can make changes and become a trustworthy partner. The “four musts” are the most basic and crucial foundations that will determine whether cross-strait relations develop in a positive direction.

A so-called “spiritual union” should be built on mutual respect and understanding, with governments on both sides of the strait handling issues regarding the people’s welfare pragmatically, such as the urgent swine fever epidemic we are now facing. Pressuring international corporations to change their designation for Taiwan won’t bring about a spiritual union, nor will buying off Taiwan’s diplomatic allies or circling Taiwan with military aircraft and naval vessels.

Lastly, I want to reiterate that the results of the 9-in-1 elections absolutely do not mean that grassroots public opinion in Taiwan favors abandoning our sovereignty, nor do they mean that the people want to make concessions regarding Taiwanese identity.

Democratic values are the values and way of life that Taiwanese cherish, and we call upon China to bravely move towards democracy. This is the only way they can truly understand Taiwanese people’s ideas and commitments. Thank you.”

The post has not been edited by www.currentriggers.com and has been presented verbatim.