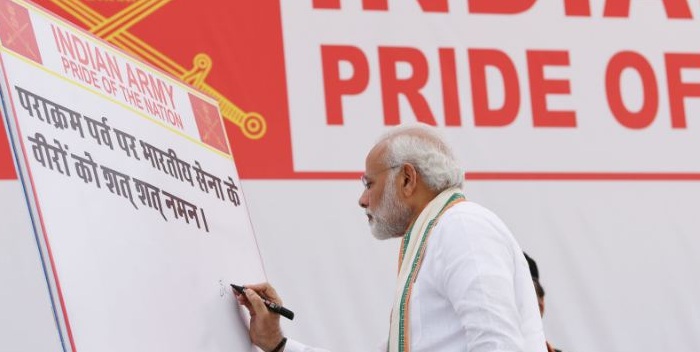 The Prime Minister  Narendra Modi hailed the historic Bodo Accord signed today and said the Accord will lead to transformative results for the Bodo people.

In a tweet Prime Minister said, “Ushering in a new dawn of peace, harmony and togetherness! Today is a very special day for India. The Accord with Bodo groups, which has been inked today will lead to transformative results for the Bodo people.

Bodo Accord inked today stands out for many reasons. It successfully brings together the leading stakeholders under one framework. Those who were previously associated with armed resistance groups will now be entering the mainstream and contributing to our nation’s progress.

The Accord with Bodo groups will further protect and popularise the unique culture of the Bodo people. They will get access to a wide range of development oriented initiatives. We are committed to doing everything possible to help the Bodo people realise their aspirations”.

Union Minister for Home Affairs, Amit Shah presided over the signing of a historic agreement between Government of India, Government of Assam and Bodo representatives, in New Delhi today, to end the over 50-year old Bodo crisis. Further, a permanent solution has been found out for the problem that has cost the region over 4000 lives.

With this agreement, over 1500 armed cadres will abjure violence and join the mainstream. A Special Development Package Rs. 1500 crores over three years will be given by the Union Government to undertake specific projects for the development of Bodo areas.

Speaking on the occasion,  Shah called this momentous occasion as the harbinger of a golden future for Assam, and that it was a direct consequence of Prime Minister Narendra Modi’s policy of focusing on North-East region’s development. The fruition of this vision can also be seen in the Bru-Reang agreement signed on January 16, 2020 to end the humanitarian crisis in Meghalaya and Tripura, recent surrender of 644 armed cadres in Assam and surrender of 88 armed NLFT cadres in Tripura to bring them to mainstream, in addition to today’s agreement.

Shah said that Assam’s territorial integrity is assured with this agreement, as every single Bodo group has come on board. He noted that while earlier the states of North East used to feel neglected, Modi government ensured that a Union Minister visited the region every week in order to ensure effective implementation of Government schemes and timely completion of infrastructure projects.

The Home Minister added that this agreement is another success of Prime Minister’s vision of ‘Sab ka Saath, Sab ka Vikas, Sab ka Vishwas’, as with this agreement, Assam’s road to development has been cleared. Ever since assuming office, Modi has initiated numerous policy level interventions that have improved infrastructure, connectivity, economic growth, tourism and social development of the region.

Talking on the salient features of the agreement, Shah said that the objective of the MoS is to increase the scope and powers of the BTC and to streamline its functioning; resolve issues related to Bodo people residing outside Bodoland Territorial Area Districts (BTAD); promote and protect Bodo’s social, cultural, linguistic and ethnic identities; providing legislative protection for the land rights of tribals; ensure quick development of tribal areas and rehabilitate members of NDFB factions.

The Minister said that in the past, not being satisfied with the settlements of 1993 and 2003, the Bodos have been consistently demanding more powers. A comprehensive and final resolution to their demands has been arrived at, while retaining the territorial integrity of the state of Assam. After Modi government came to power, intensive discussions were held since August 2019 with ABSU, NDFB factions and other Bodo organizations to reach a comprehensive solution to end the decades old Bodo movement.

After the agreement, the NDFB factions will leave the path of violence, surrender their weapons and disband their armed organizations within a month of signing the deal. The Union Government and the Government of Assam will take necessary measures to rehabilitate over 1500 cadres of NDFB (P), NDFB (RD) and NDFB (S), as per the laid down policy of the government.

The current agreement proposes to set up a commission under Section 14 of the Sixth Schedule to the Constitution of India, which will recommend the inclusion or exclusion of tribal population residing in villages adjoining BTAD areas. In this commission, besides State government there will be representatives from ABSU and BTC. It will submit its recommendation within six months from the date of notification.

The Government of Assam will establish a Bodo-Kachari Welfare Council as per existing procedure. The Assam government will also notify Bodo language as an associate official language in the state and will set up a separate directorate for Bodo medium schools. The present settlement has proposal to give more legislative, executive, administrative and financial powers to BTC.

Bru-Reang Refugee Crisis: Around 34,000 IDPs to be settled in Tripura