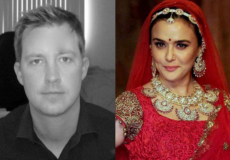 Her fans are heartbroken that the lovely Preity Zinta has chosen to tie the knot with her US boyfriend Gene Goodenough. But the worst is that the actor has not even put one picture that confirms the same till the writing of this report! It seems our lovely Preity chose the path of her Bollywood friend […]

Kamaal Rashid Khan (KRK is the name!) today did it again; he trolled Delhi Chief Minister Arvind Kejriwal and Aam Aadmi Party leader Ashutosh on their penchant to review movies! When AAP leader Ashutosh tweeted that he “Watched Spotlight/Aligarh. First one is a reporter’s diary/other is a question mark. Good subject sensitively handled.@BajpayeeManoj.” To the above […]

Director Farah Khan known for her flamboyant masala movies has adopted two cute looking pups as the play-buddies for her children. In a Facebook post, Farah also revealed that the pups have been named as Gulab-Jamun. The lucky pups stole the heart of the family and found themselves getting adopted soon after. A doting Farah posted […]

Abhishek Kapoor: Director Abhishek Kapoor is one of the primary reasons to root for Fitoor. The movie sees Kapoor get behind the lens and adapting Charles Dickens’ novel Great Expectations and considering that he had showed his class with flicks such as Kai Po Che and Rock on, there is a lot of interest about […]