New Delhi, May 19, 2022: Scientists have reported spotting of the fossil of a Madtsoiidae snake from the molasse deposits of Ladakh Himalaya for the first time indicating their prevalence in the subcontinent for a much longer time than previously thought. Madtsoiidae is an extinct group of medium-sized to gigantic snakes, firstly appeared during the […] 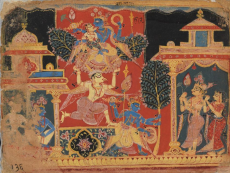 Lord Krishna dream is seen by many across the globe as he has devotees in nearly all realms. Lord Krishna is considered a Master or a Teacher to the mighty Pandavas and also others. Lord Krishna’s avatar’s whole life was a service to justice and Dharma. The message of Lord Krishna was of love, and […]

Lord Kartikeya dream is seen by his most ardent devotees. The Lord is a Hindu deity who many see in their dreams at some point in their lives, especially, those who are devoted to this swaroop of the Bhagwan or God. He is worshipped all over the world by Hinduism followers and he is the […]

Tulsi dream is rare and so rarely would it appear to a dreamer. However, any sign of the abundance of Tulsi or the holy basil, dried or otherwise is the sign of healing energy the person has. If fresh Tulsi leaves are seen in the Tulsi dream, then it is the sign of marital happiness […]

Sex dreams are not uncommon in our world. Many people often see these dreams but rarely do they understand. Also, sometimes a person may either feel disgusted or shy while discussing it. Now, one of the most common sex dreams is one mating with a cobra. The cobra sex dream in particular gives rise to […]

Saw certain words in dream? Something like ‘Hello’ or ‘Wish’ in your dream state? And somehow, even though you are asleep, you are aware that this is a sign? Well! Then it is 100 percent a sign for you to note. Seeing words in dream is rare, but it often means that the dreamer’s soul […]

Did you see Angel Number 999999? It is a sign of Supreme Consciousness herself. This is also the sign of Devas/Guides surrounding a person and asking him/her to communicate with the Supreme Soul with an open heart. Anahata or Heart Chakra meditation (chant ‘Yam’, pronounced ‘yum’, every day whenever free) is a must for people […]