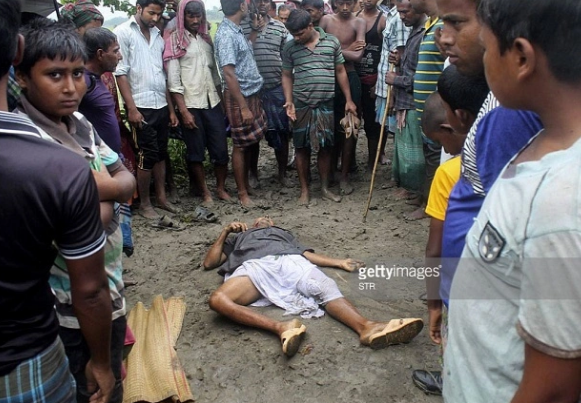 Dhaka, July 19, 2016: It is not easy to be a Hindu Priest/Purohit in a radicalized nation such as Bangladesh. Due to their visibility in performing religious duties, Hindu Priests are becoming a target of hate and terrorism.

But why such a death? The Hindu Priests are seen as the representative of the Hindu religion which is seen as inferior to Islam in the nation. Hindu Priests are also abused as any attack on them sends a direct message to the Hindu community that when even a higher religious authority can be eliminated like this, then anything can happen anytime with others. In short, either convert, leave the nation or simply be prepared to die.

The hate for Hindu Priests was already prevalent in Pakistan and it seems to have been carried into Bangladesh as well, which incidentally was made after a Hindu-majority India decided to heed its cries for liberation! Now, in Pakistan, the Brahmin community has been effectively eliminated by forced conversions, abduction, and murders. Could this be the fate of Hindu Priests in Bangladesh? We don’t know that, but we do know that this is a likely possibility considering the prevailing circumstances.

Shiva Prasad Chakravorty, a Hindu Priest of the Jogadia Sree Sree Joy Kali Mandir and Priest Liton Chakravorty of “Ashirbad Shanga ” at Companygonj Upazila of Noakhali district have been threatened by unknown perpetrators on 16th July 2016.

The Hindu Priests informed the Temple committee after which Bimal Chandra Karmaker, General Secretary of Joy Kali Mandir, made a general diary in Companygonj police station.

When the Sub Inspector of Police- Shishir Kumar Biswas visited the Temple he felt that the letter was sent to harass these Hindu Priests.

Bangladesh Minority Watch (BDMW) believes that the letter should be taken seriously considering the number of Hindu Priests who have been killed brutally but will anything happen? Unlikely, considering that the Bangladesh government is happy to offer rehabilitation packages worth lacs of Takas to terrorists now, if and only they give up arms.

The problem seems to be that the government is thinking that the terrorists have been ‘lured’ into terrorism due to paucity of money while on the other hand, in their view to be precise, they are merely fulfilling their religious duty and are ready to kill any innocent provided he comes from a different religious stream.

Such an offer shows that the Sheikh Hasina’s Awami League has no plan of action to stop the home-grown terrorism (she categorically denies IS presence so it has to be Bangladesh’s own terrorists). If a nation is willing to give up without even trying to fight, then there is something seriously wrong with the political wisdom.

In another case, some unknown extortionist demanded Taka 20,000 from a Hindu Priest by sending a threatening letter to the Sree Sree Anandamoyee Sevasram in Rangpur DistrictThe Ashram is located at the Karamycel College Road -Rangpur District and the letter was addressed to the Hindu Priest Bijoy Chakravorty of Sree Sree Anandamoyee Ashram on Monday. The letter said that the Priest will be killed if he does not pay up; in short a sort of Jaziya must be paid up, if the Hindu Priest has any desire to survive.