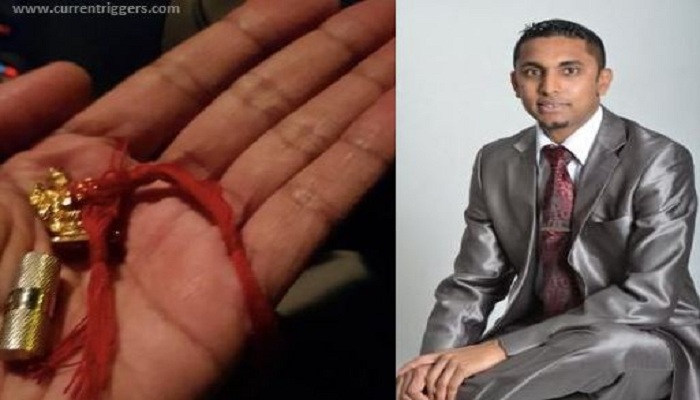 In South Africa’s Durban, the Hindu community was in an uproar after the Pastor Sam McWayne of the Harmony Centre posted his bigoted comments after he converted a man. He had written the post in question on October 10th and it read:

“Tonight we had the greatest of pleasure to pray with a family that gave their heart to the Lord.

They packed boxes of “stuff” they use to worship and asked us to dispose of it. We dedicated the Home in Jesus Name.

After 47 years the Man of the home asked me to cut of the strings he had tied around his wrist cos he chose to follow Jesus for the rest of his life. We acted upon their confession and their submission to the Word of God.

He later emptied his wallet where he held onto souvenirs which he taught gave him protection but learnt that Jesus gives his Angels charge over us. We give all Glory to Jesus.”

As the post started getting shares, the Hindu community of South Africa started protesting against using of the word ‘stuff’ for Hindu deities and articles of faith. The uproar made the Pastor to tender an apology to the Hindu community on October 14th and wrote that he would start by apologizing to all who felt offended by his post. He however said he had no intention of insulting any religious faith. He however stressed that he had no idea what was the ‘stuff’ that was in the packet/box.

While the Pastor claimed he will ‘rejoice’and was not ashamed of his action, yet as soon as the posts became viral, and the criticism started mounting, he shut down his Facebook profile.

South African model of Indian origin Shashi Naidoo had once explained what it was like to be a non-Christian when she was but a child. She had told a paper:

I was part of the first group that was accepted into a Model C school. There were only two of us and we were both Indians. They were testing the waters by only accepting two Indian girls. Some teachers were culturally biased. They would do religious studies and it would only be about Christianity. The teacher would mock us in full view of our schoolmates and say we were going to go to hell because we didn’t believe in Christ.

Dawie Kriel a Durban man’s rants against Hindus for using firecrackers during Diwali festival also had the Hindu community angry.

In his comments, laced with religious undertones, he called the Hindus ‘idol worshippers’ and ‘devil disciples’ much to the community’s anger.

Last year as well, a Hindu woman was targeted and accused of participating in witchcraft, but the matter died after a while.

But while the Pastor may be feeling under the weather due to quick and fierce reaction from the Hindu community, he in fact in his apology joins none other than the Prime Minister of Trinidad and Tobago who recently apologized to the Hindus after his partymen ended up offending it.