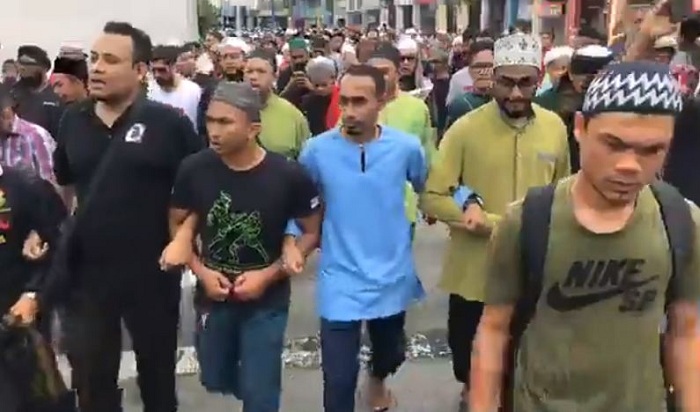 The Mufti of Perlis Asri Zainul Abidin today praised the Muslim protesters who marched in George Town today against the Malaysian Indian leader amidst the chants of Alla-O-Akbar (Allah is great).

“Alhamdulillah (praise be to God), they are all against Ramasamy. Do not allow LTTE to threaten the country.” LTTE refers to the now-defunct Sri Lankan militant group Liberation Tigers of Tamil Eelam with whom Ramasamy has been alleged to be sympathetic with.

But how is Malaysia being threatened by the LTTE when even Sri Lanka and India today does not count it as a challenge?

The answer lies in Malaysian Indian leader Ramasamy’s protest against Zakir Naik and his stance that the radical preacher should be deported to India.

It seems that to put Ramasamy on the backfoot the ghost of LTTE is being raked up in Malaysia.

Ramasamy has had several run-ins with Mufti of Perlis when he insulted Hinduism some time back. In one of his most scathing attacks, the feisty Malaysian Indian leader had shut the Mufti of Perlis.

Then later on the foray of Hindraf in the elections, again, it was Ramasamy who had shown Mufti his place. Therefore, the issue of LTTE is being raked up by the Mufti even when the Muslim leaders from even Indonesia have nothing but praise for the Penang’s outspoken Malaysian Indian leader.

The Mufti of Perlis Mohd Asri Zainul Abidin in an interview to Utusan Malaysia a few days earlier demanded that the Malaysian Indian leader Ramasamy should be investigated by the police for his ties with the LTTE.

He told the interviewer that he can see Ramasamy’s anti-Islam attitude, similar to the characteristics of the LTTE struggle, in which LTTE massacred Muslim villagers for Tamil homeland in Sri Lanka.

Ramasamy has been urging Malaysia to respect extradition treaty with India and handover Zakir Naik to the country.

Even as the fight rages on the controversial Islamic preacher, Zakir Naik’s lawyer Mohd Khairul Azam Abdul Aziz put out a letter from the Malaysian police which says that India has not sought to extradite Zakir Naik.

So what exactly has India done on Zakir Naik so far?

Minister of State for Home Affairs, Hansraj Gangaram Ahir in a written reply to a question in the Rajya Sabha on July 25th, 2018 said:

“Government of India vide a notification dated 17th November, 2016, declared Islamic Research Foundation (IRF) as an unlawful association under the Unlawful Activities (Prevention) Act, 1967, as IRF and its members, particularly, the founder and President of the said Association, Dr. Zakir Naik, had been encouraging and aiding its followers to promote or attempt to promote feelings of enmity, hatred or ill-will between different religious communities and groups.

The Provisional Arrest Request and Extradition request in respect of Zakir Abdul Karim Naik was sent to the Ministry of Foreign Affairs, Government of Malaysia on 19th January 2018.”