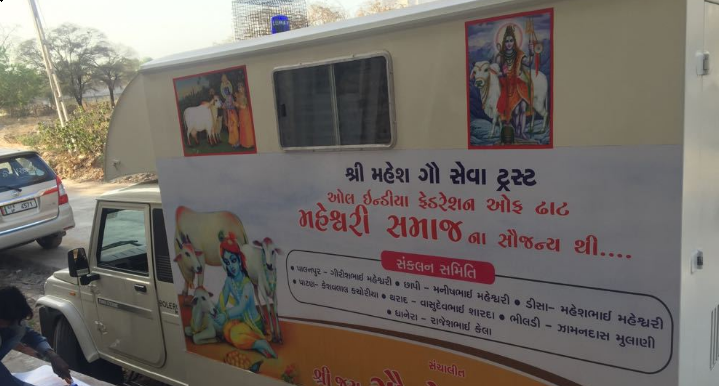 On 22 April a function was held at Maheshwari community hall Palanpur, Gujarat, by Shri Mahesh Gau Seva Trust. At the function, an ambulance was gifted for medical assistance and welfare of Cows in northern Gujarat. Many Hindu saints and cow lovers were present at the site since morning.

The function started in the morning at 10 am with Ganesh Sthapna. The Dhat Maheshwari community was praised for this generous gift to the cows as when the young generation is not taking care of their elders, the community is coming forward to protect the cultural mores and animal welfare.

Rajeshbhai Harani also added that cow welfare is central to this community’s culture and that the cows have a special place in hearts of Dhat Maheshwari community members since centuries. This community is the original native of the Thar desert and has spread over both sides of India-Pakistan border and the areas of Gujarat, Rajasthan, and Sindh.

He said that their community has been living in trying circumstances; with the shortage of water and many other facilities till 1980, but they always had one bankable friend that was the cow.

Dhat Maheshwari Samaj has prepared 5000 donation boxes for collecting funds for the cow and distributed it in each and every home of the Samaj.

Daily donation of each family member is put into the box at home and every year each household donation is collected and distributed for the welfare of cows.

They have been maintained Gauchar with revenue authorities for grazing of cows along with other cattle. With initiatives taken in the 1970s of Diwan Chunilal  Harani, Sheth Moolshankar Sharda, Diwan Chatromal, Advocate Vaghjimal, Advocate Kella, the govt. sanctioned land for Gauchar at the Tharparkar district in Pakistan. Because of this initiative, Tharparkar is the largest stock of cattle-heads including cows in the whole Pakistan in 2015.

The elders of the samaj are hoping that their system of collection of cow donations and its application can be repeated all over India.