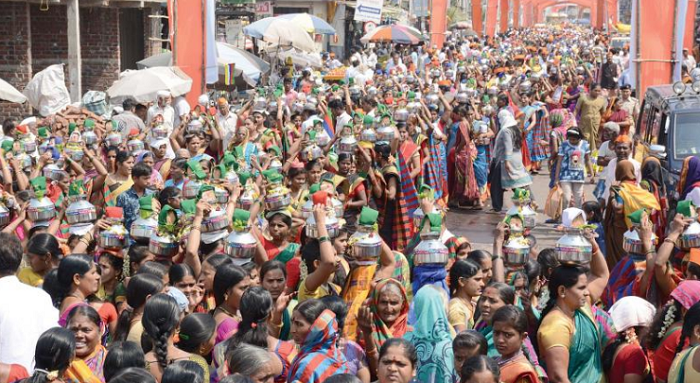 The separate religion status for Lingayat community has angered many in the Hindu fold as people see it as an attempt to divide the community. On Sunday in a gigantic rally in Vijayapura, Srishaila seer Dr Channasiddarama Panditaradya Swamiji, who is one of the Pancha Peetha seers, accused the Congress of working on an agenda to eliminate Hindus.

Not stopping at that, he called the leaders of Congress, ‘Pak agents.’

In a report in Deccan Chronicle, the seer has been quoted as saying this:

“We can no longer keep quiet and let Congress do anything with our religion, it is time to retaliate. The Pancha Peethas are losing patience and cannot tolerate a division of Hindu religion in the name of seeking independent religion status for Lingayats.”

He said that the government is working to divide Hindus as it understands that Hindus have become major support base of the Bhartiya Janata Party. Asking people to not vote for Congress at all, he said that the separate religion status is a ploy to stop Narendra Modi from retaining power in 2019.

He went on to warn Congress and said that the party is taking their patience as nothing but a sign of weakness and said that it will face stiff resistance from people if the government does not withdraw the proposal for separate religion status. He also told Congress to apologize unconditionally for trying to divide the Hindu fold.

The Deccan Chronicle report, dated 26th March 2018, reports that the Seer accused the former bureaucrat SM Jamdar, the man behind the separate religion status for Lingayats, of showing disrespect to the Pancha Peethas.

Rambhapuri seer Dr Veerasomeshwara Shivacharya Swamiji has been quoted as saying that they are thinking in filing a case against Jamdar.

The Seer explained to the crowd that the Veerashaiva-Lingayats are Hindus as they worship ‘Ishtalinga’ which is a symbol of Hindus.

Arjun Ram Meghwal, Union Minister had earlier said that Lingayat is part of Hinduism. He too had said that separate religion status for Lingayats is being brought up to fulfill political goals and divide Hindus.

Meanwhile, Social Media is abuzz with its take on Lingayats:

Here's the summary:
1) Siddaramaiah did a caste survey in 2015. Didn't release results but knows numbers.
2) BJP announced Yeddyurappa (a Veerashaiva #Lingayat) as CM candidate.
3) V-L is the most politically dominant group among Hindus of KA.
4) So Congress plans #DivideAndRule

I am born as Hindu #Lingayat and I will die as Hindu Lingayat. Period.

I am a Lingayat, I am a Veerashaiva and I am ultimately a Hindu, An Indian

Government and Political Parties have no business whatsoever, to grant a religion status to any community

It is clear that the govt is doing this only due to the upcoming election: All India #Veerashaiva Mahasabha at Bengaluru, Karnataka pic.twitter.com/MkflohmJ1w

However, the Congress leader Siddaramaiah is unlikely to withdraw from the fight. On March 19th, he had said:

The demand to recognize the Lingayat faith as a religion is an old one. What the Government has done is a recognition of a fact acknowledged as far back as the Mysore Census of 1871. Those in BJP accusing us of dividing religion better listen to the Lingayat-Veerashaiva community.

So the Seer may have to gear up for a tough battle and that too against the ruling state government if he wants to keep Lingayat community within the Hindu fold. The clock is ticking.

First ever Lord Parshuram statue is coming up in this state but that’s not all!