Hundreds of Pak Hindu migrants are thanking Prime Minister for becoming Indian citizens. Those who have migrated to India due to religious persecution in the last decade got Indian citizenship by District Magistrates (DM) in migrant concentrated districts of India.

There is a celebration in every home of these Pak Hindu migrants on getting Indian citizenship in cities of Ahmedabad, Rajkot, Jaipur, Nagpur, Indore and Raipur etc. They are praising the Narendra Modi, the Prime Minister of India, for fulfilling the promise he had made in the election speech in April 2014 at Barmer, Rajasthan.

The government of India and state government gave high priority to the Pak Hindu migrants in citizenship grant. First of all, the Gujarat Home Minister Pradip Singh Jadeja started distribution of 114 citizenship certificates at Ahmedabad during the Diwali time.

Pune, Jaipur and Jodhpur district administration themselves distributed the citizenship certificates (c.c.) in their offices. Lucknow Hindu migrants were lucky, where Rajnath Singh himself distributed the c.c. at the Sindhi Ashram on VIP Kanpur ring road at the start of the year 2018.

Chief Minister of M.P. Shivraj Singh Chauhan gave the citizenship certificates to the migrant residents of Indore and Bhopal.

The road to citizenship was long and Pak Hindu migrants and their groups and associations constantly reminded the officials of Govt. of India to expedite the matter. With support and help from Ministers, M.P.s and Govt. officials, it was made possible.

First of all, union cabinet on 13th July, 2016 under the chairmanship of Prime Minister decided to give citizenship and other facilities to Hindu migrants (Afghanistan and Bangladesh also included) residing in India. Govt. of India’s ministries started working to implement this decision.

Ministry of Home Affairs (MHA) issued the notification on 23.12.2016 to implement union cabinet decision and power to confer Indian citizenship has been delegated to select District Magistrates and Home Secretary of states. Then, the work began.

Union Home Minister constituted Joint Parliamentary Committee to amend the Citizenship Act. Joint Parliamentary Committee (JPC) under the chairmanship of Dr. Satya Pal Singh and team visited Ahmedabad on 18-19 April 2017 to get first-hand information about the situation of  Hindu migrants. They held meetings in Ahmedabad and Rajkot with Hindu migrant families which were mostly from Pakistan. 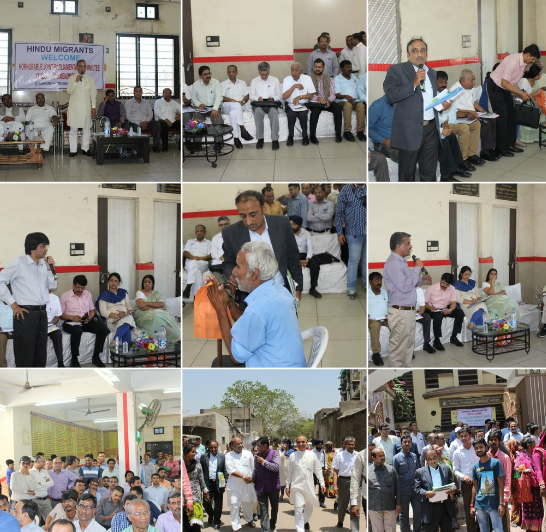 Many migrant Hindu professionals narrated their stories and requested the JPC for grant of citizenship to the intellectuals of the minority Hindu community in Pakistan. It was highlighted that many educated persons belonging to the Hindu community have been migrating to India. Their children have also got the professional qualification in India.

Their talent can be used in the society in a far more suitable way, if only they get Indian citizenship at the earliest. Ministry of Home Affairs (MHA) vide letter no.26030/135/90/IC.I in 1990 have decided to relax certain conditions for the grant of Indian Citizenship to intellectuals of the minority community(in Pakistan) who are of Indian Origin in the specified categories; like the Doctors, Engineers, Chartered Accountants, Pharmacists, and Scientists by the way of naturalization under section 6(1) of the Citizenship Act, 1955 and waiving the requisite residential qualifications laid down in the aforesaid act.

Following are some are important aspects which must be considered as well:

1) The procedure of submitting the citizenship applications, who migrated to India before 31-12-2014 and do not possess any travel document (like Passport and Residential permit) should be eased: For now, they have been authorised by MHA notification F.No.25022/50/2015-F.1 dt.07-09-2015.

2) The procedure of submission of valid Pakistani passport for the children of Hindu migrants at the District Magistrate Ahmedabad office must be eased.

3) The procedure of submitting the applications of children of 1971 war migrants from Chhachhro Pakistan: Hindu Parents got Indian citizenship earlier but the children were left out due to ignorance. These children are now more than 45 years old and have no documents, therefore, submission of offline application along with Affidavit is suggested and the format of the Affidavit to this effect is being requested.

4) Necessary changes in the online software for accepting citizenship application from intellectuals Hindu professionals with relaxations in the minimum residency period.

5) The procedure of obtaining clearance from all concerned departments/agencies within a given time frame. High Court of Rajasthan has advised to District Magistrate (DM) Jodhpur to complete the citizenship application procedure within 60 days.

6.) Acceptance of valid Pakistani passports at the DM office for getting Indian citizenship certificates.

7.) Acceptance of offline applications from the intellectuals of migrant Hindu community (professionals like Doctors, Engineers, Chartered Accountants, Professors, Bankers, Lawyers and other professionals) by relaxing minimum residency conditions under sec.6(1) of Citizenship Act.

Sindh Minority Migrants Association representative Rajesh Maheshwari also added that many Ministers, MPs have supported the cause of Hindu migrants.

The group says that “with their constant support and patronage, the whole citizenship grant process to Hindu migrants has become faster. There are some issues of citizenship of Pak Hindu migrant professionals and power delegation last date of 23.12.2018, should be extended to 3 more years so that maximum migrants can get the benefit.”

The following article has been submitted to www.currentriggers.com by Sindh Minority Migrant Association group and only minor editing has been done for convenient reading. The views are of the groups’ own.