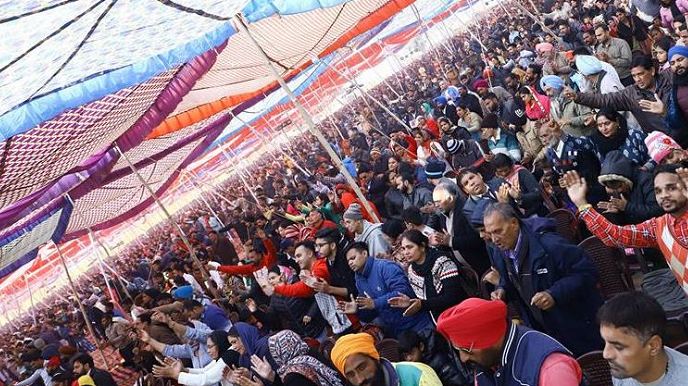 The ‘healing programs’ are not a Malaysian thing anymore. It is spreading at a fast rate in Punjab and attracting huge crowds of Hindus and Sikhs.

Leading the race is Ankur Narula who calls himself a ‘Senior Pastor’ and claims to be using ‘prayer services’ that tell ‘evil spirits’ to leave the body. His Facebook page ‘Ankur Narula Ministries‘ is filled with pictures of people who have gotten cured of life-threatening diseases, gained a Visa to England after clearing IELTS or simply people vomiting after the evil spirits have left their bodies!

Hindus and Sikhs throng these places in huge numbers for a variety of reasons.

The Pastor Narula even posts ‘testimonies’ but in all this, he is not alone and his growing clout could be understood from the fact that several politicians also came calling during a Christmas Shobha Yatra.

The state of Punjab accounts for 2.3% of the total population and 4.3% Scheduled Caste population of India.

A sizeable number of SC families still live below the poverty line and several are devoid of education as well.

In a quote to the Tribune India, Dalit activist Tarsem Peter called these Sabhas and events as sheer commercialization and said that “they (people like Ankur Narula) are cashing in on the sentiments of the poor looking for a quick fix to their problems. It also reflects the failure of dominant religions to keep their flock together.”