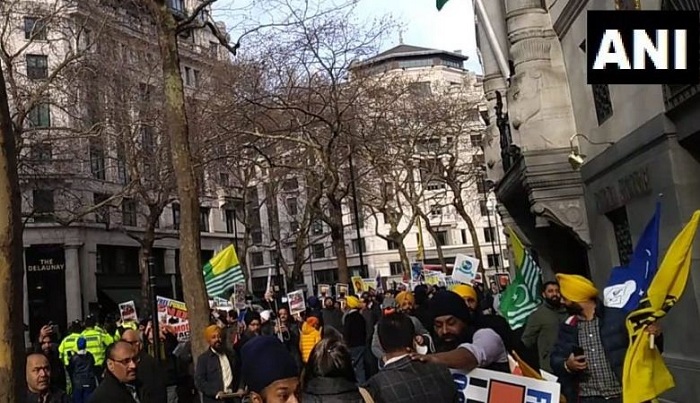 The Khalistani mob also chanted Islamic slogans like ‘Naraa-e-Taqbeer’ and ‘Allah-o-Akbar’ while attacking the British Indians.

The Khalistanis involved are reportedly members of the groups like the Overseas Pakistanis Welfare Council (OPWC) and Sikhs for Justice and they attacked members of Friends of India Society, UK when the latter countered their anti-India slogans.

He also said that the Sikhs follow Sikhism by heart and in actions.

‘They are not Sikhs if they don’t follow Guru Sahibs’ teachings of never harming the innocent’ Sirsa said in a comment on social media.

Sirsa also called it a malicious act of ISI to defame the Sikhs all across the world.

Pro-Khalistani people allegedly supported by ISI attacked a number of British Indians who were standing outside the Indian High Commission in London on March 9. pic.twitter.com/orNSJipObs

He also urged the Sikh community to speak against ISI using Sikhism to spread hatred and deterring the image of Sikhs.

ISI and the Pakistani Army are also using social media handles to spread fake news against the Indian Sikhs.

Indian Army issued an advisory asking people to guard against the false and malicious creatives and tweets from terror- sponsors.

Interestingly, just a few months back a prominent Sikh group had raised the issue of sexual grooming of Sikh girls by Pakistani Muslim men but Khalistani groups largely stayed mum on the issue.

In January Indian government had said that a total of 18 Khalistani terror modules have been neutralized in Punjab during the last two years, wherein a total of 95 accused persons have been arrested. While the movement has been uprooted in India, it seems the UK and Canada still have some Khalistani elements flourishing.